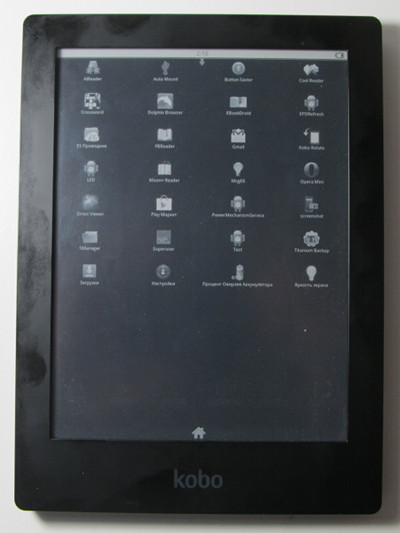 Last week I posted about a dual-boot hack for the Kobo Aura HD that lets you choose to run Android off a memory card or boot the stock Kobo operating system from the internal card.

In theory dual-booting is a great thing to have on a Kobo eReader because it’s like having two devices in one, but in practice the Android port is simply too buggy and frustrating to use on a regular basis.

I guess the Nook Touch spoiled me. Everything about running Android on the Nook is smoother, faster, and more functional. Developers put a lot more time into optimizing the Android software on the Nook to run Android, and it shows.

I’ve experienced so many problems with Android on the Kobo Aura HD that I would not recommend anyone install it except those that are very tech-savvy and are very familiar with Android.

The device freezes up regularly, and the frontlight sometimes flashes constantly. I can’t even get apps to install anymore because of some error. At one point I thought my Kobo Aura HD was borked for good, but then plugging it into a computer triggered a startup. I found that it wouldn’t turn on because it thought the battery was dead, but the battery wasn’t dead at all. A couple minutes on the charger and the indicator was back up to 40%.

Another problem is that it comes setup for a different language. You can go into settings and change it to English, but that doesn’t work for everything; a lot of the menus are still in German because the software is based on the Tolino Shine firmware.

It’s not all bad, though. Some apps work okay. Comixology works surprisingly well. The Adobe PDF reader app works okay too, and offers more features for PDFs than the Kobo software. The web browsers seem to work fine as well. It comes with Dolphin and Opera preloaded.

It comes with several ereader apps preloaded too—Moon+Reader, AlReader, Cool Reader, FBReader, eBookDroid—and most of those seem to work well enough to function. I tried the Kindle app and it kind of works but is super slow to load and there’s no way to access the settings menu to change text size, etc.

Despite the negatives, if you want to take the plunge and try Android on your Kobo Aura HD, here’s the setup and install directions: Kobo Android dual-book hack.