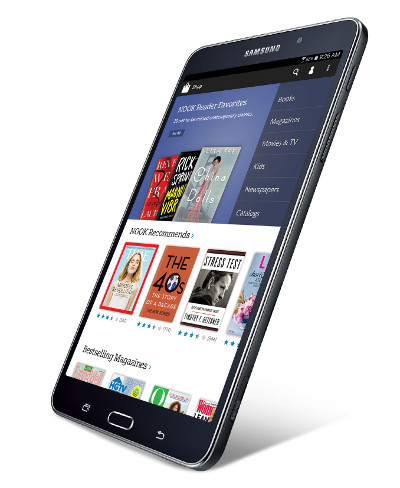 Samsung and Barnes & Noble have teamed up to sell a co-branded tablet called the Galaxy Tab 4 Nook, and both parties have just scheduled an unveiling event on Wednesday, August 20th.

Samsung has confirmed that the Galaxy Tab 4 Nook will be shown at the event, which is being held in New York.

There’s likely to be some other Samsung and Nook partnership announcements to be made at that time as well. Perhaps a content tie-in—B&N has been trying to advertise digital magazines a lot lately.

Samsung and Barnes & Noble first announced their new partnership back in June. B&N has been struggling with Nook hardware for the past few years, and has expressed a desire to move away from designing and developing their own Nook tablets in favor or outsourcing.

It has already been revealed that the Galaxy Tab 4 Nook will use the same exact hardware as Samsung’s current 7-inch Galaxy Tab 4, which I reviewed back in May.

That means the new Nook will feature a 7-inch display with a resolution of 1280 x 800. It will have a 1.2GHz quad-core Qualcomm processor, 1.5GB of RAM, 8GB of internal storage, a microSD card slot, Bluetooth 4.0, and front and rear cameras.

The hardware on the Galaxy Tab 4 is solid and elegant, but it’s rather pedestrian—nothing really stands out about it. It will be interesting to see what B&N does to the software because when I reviewed the Galaxy Tab 4, I thought Samsung’s software was one of the better aspects that made the device stand out from typical Android tablets.

Right now the 7-inch Galaxy Tab 4 sells from Amazon for $179. It will be interesting to see what price Barnes and Noble decides to sell their version for—it’s hard to imagine them having much success against an existing well-known brand if they price it any higher than that.