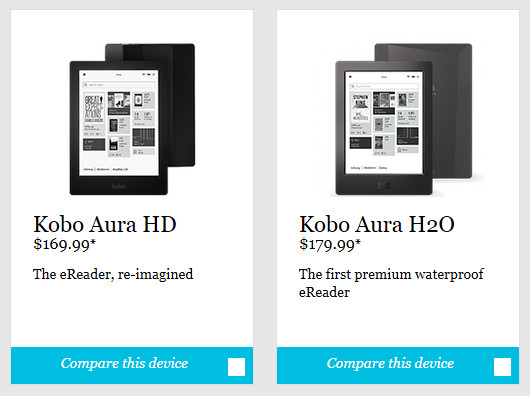 Now that Kobo has officially revealed the Kobo Aura H2O, their first waterproof and dustproof ebook reader, it’s clear that the device is a lot like the Kobo Aura HD, minus the IP67 certification.

Kobo has a comparison chart feature on their website where you can directly compare their ereaders side-by-side. The similarities and differences between the Aura HD and Aura H2O are intriguing.

Aside from the waterproofing, both devices are very similar from a hardware and software standpoint. In fact the software side of things should be pretty much identical, as it is across all of Kobo’s ereaders.

The Kobo Aura HD is on sale at Kobo.com for $149 until September 1st, so if the waterproofing doesn’t mean much to you then you may consider saving $30 for what is basically the same device otherwise.