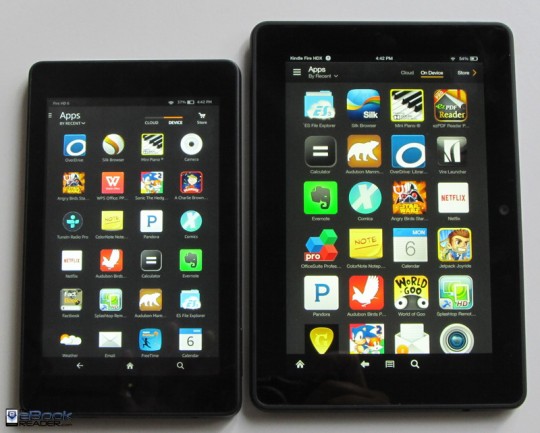 I’ve been testing the new Fire HD 6 extensively since it got released last week, and I wanted to do a comparison review between it and the 7-inch Kindle Fire HDX, mainly to show the difference in size between a 6-inch and 7-inch tablet.

Most companies have settled on offering 7-inch tablets for the smaller end of the tablet spectrum. The Fire HD 6 is the first 6-inch tablet, and the small size gives it an edge in the portability and pocketability departments.

Now let’s talk specifically about the differences between the Fire HD 6 and the 7-inch Fire HDX. Right now the Fire HDX is running Fire OS 3.0, but Amazon has said that it will be getting updated to the new Fire 4.0 OS that comes with the HD tablets. Once that happens, the software will be almost identical between the HD and HDX tablets; the main difference will be the “Mayday” button available on the HDX line to chat with customer support.

Hardware is where the HDX has most of the advantages, although the 7-inch HDX lacks a rear camera, so the HD’s have the edge there. The Fire HD 6 costs half as much as the 7-inch HDX, and it still offers a respectable screen in terms of resolution, but the HDX has better specs all around, and the dual speakers sound better.

The screen doesn’t seem all that much smaller on the Fire HD 6 when you are using it, but the overall size sure seems a lot smaller than a 7-inch tablet. One inch doesn’t sound like a lot, but it makes a big difference when holding the tablet with one hand or when sticking it in a pocket.

More comparison info between these two Kindle Fire tablets and all the other models past and present can found on the Kindle Comparison Table.