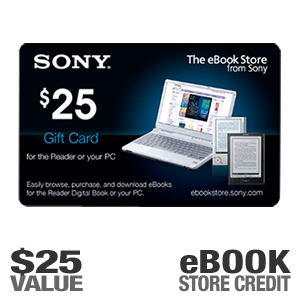 Sony decided to closed down their ebook store in the United States and Canada back in March of this year. Then they proceeded to close their European and Australian ebook stores in June.

Last week I was browsing Walmart’s website and was surprised to come across a listing for a $25 Sony ebook gift card. The card isn’t being sold by Walmart; it’s a marketplace item listed by TigerDirect.

As it turns out, TigerDirect has these outdated, no longer valid Sony ebook gift cards for sale on multiple websites, including eBay, WalMart and of course TigerDirect’s own website.

Given the fact the Sony ebook store has been closed for several months now, it’s flat out ridiculous that TigerDirect continues to sell these gift cards for a store that no longer exists.

Sony sent customer accounts over to Kobo when they closed their store, and Kobo most certainly doesn’t accept these outdated Sony gift cards.

Last week I might have thought that it was just an honest mistake on TigerDirect’s behalf. But not after sending them an email suggesting that they stop selling gift cards to a store that no longer exists. They said they’d look into it but that was over a week ago now and they are still selling them, so make sure to avoid buying these bogus Sony Reader gift cards this holiday shopping season.