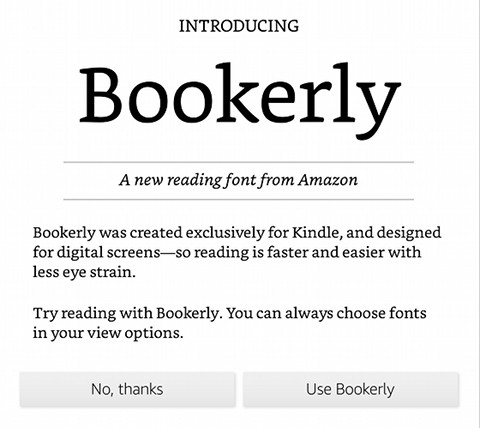 Amazon has started rolling out a new font called Bookerly to the Kindle reading app on some Fire tablets.

Amazon says that Bookerly was made specifically for Kindle, and that it was designed for digital screens. They even claim their new font makes reading easier and helps reduce eye strain.

I got a notification about Bookerly on my 7-inch Kindle Fire HDX over a month ago (screenshot above) but I totally forgot about it until I saw it mentioned recenly in some forums and articles. My Fire HD 6 has since gotten the new font choice as well. But none of the E Ink Kindles have received any new font choices in a long time.

Hopefully other Kindle devices and apps will get the new font choice soon as well. That’s one of the most disappointing things about Kindles is the lack of font choices, and the inability to add custom fonts like many other ereaders and apps offer.

Personally I think Bookerly is pretty good; but it still isn’t my favorite font. It’s better than some of the other choices that are available, especially the old standard Caecilia font.

Bookerly is a lot like Caecilia but it’s a little more condensed and upright, with smoother lines and curves, and it seems just a touch clearer and darker.

Below is a picture showing the two fonts side by side (click for bigger). Bookerly is the top four lines and Caecilia is the bottom four lines. 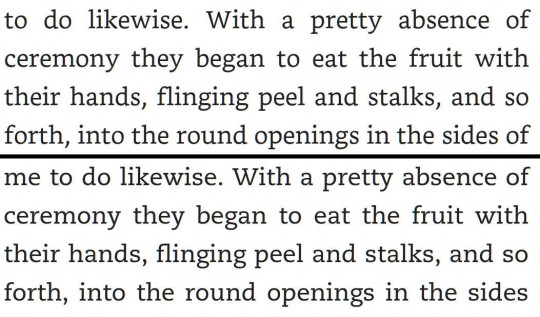 What do you think of the new Bookerly font? Are you using it to read on Fire tablets? Would you like to see Amazon add it to Kindle ebook readers and Kindle apps too?