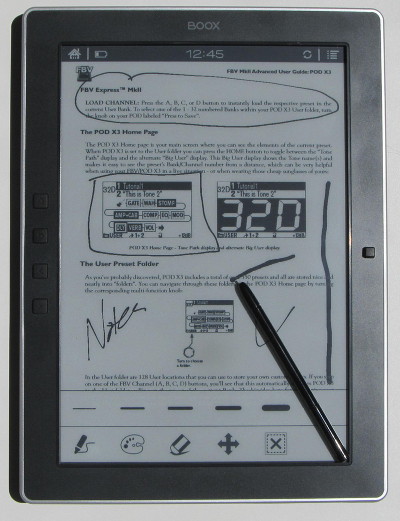 Yesterday a new 9.7-inch E Ink ebook reader called the Onyx Boox M96C became available for purchase. It’s an updated version of the original Boox M96 (review); the difference is the M96C has a capacitive touchscreen for finger touch as opposed to a touchscreen that requires using a stylus pen on the original M96.

The older and newer M96 variations run the same software, Android 4.0.4, which is going to get updated to 4.4 soon, so everything is the same from a features and software perspective, but overall each is going to offer a considerably different user experience because of the different touchscreens.

Being able to use finger touch to navigate is surely going to be a lot smoother and faster than having to use a stylus for everything.

Plus finger touch adds the ability to be able to use pinch-zooming, something that is not possible when using a stylus.

The stylus-equipped M96 has a couple advantages of it’s own too. Things like writing notes on PDF documents, underlining and highlighting work better with a stylus.

A reader sent over a link to a hard-to-find YouTube video yesterday that shows how highlighting and scribbling compares with stylus touch and capacitive touch using the two different M96 models.

The video is from a couple months ago, however. The software for the M96C may have been optimized more by now. And perhaps using a capacitive stylus could help improve accuracy?

Another thing you have to wonder about with the capacitive version is if the capacitive layer degrades the clarity of the screen at all compared to the regular M96, which has no added layer because the touchscreen works from behind.

Below is the video that compares scribbling and highlighting on both M96 devices. I’ll post other videos and information about the M96C as it comes up; subscribe to The eBook Reader Blog to keep updated.

Scribbling and Highlighting on Boox M96 Pen vs Touch