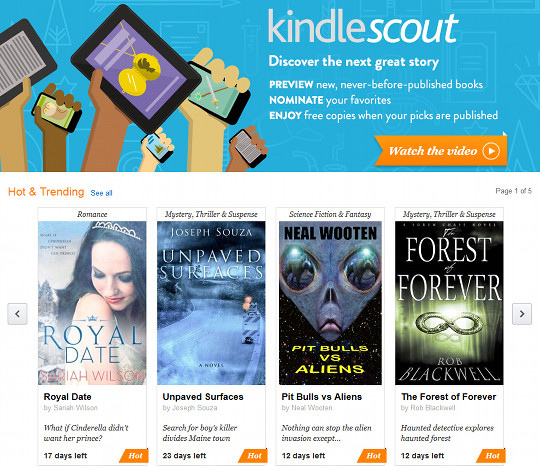 Yesterday Amazon announced that they will be publishing their first wave of ebooks next week selected through the Kindle Scout program.

About four months back, Amazon launched the Kindle Scout program that gives authors the opportunity to submit unpublished work where readers choose which titles they want to see published based on reading a sample.

Each ebook title gets listed on Kindle Scout for 30 days, during which time anyone can nominate books they are interested in, and each person can nominate up to 3 ebooks at any given time.

Then after 30 days is up, ebooks with the most nominations get reviewed by the Kindle Scout editorial team, so they get final say over who gets published and who doesn’t.

Whenever a title gets chosen for publication, the people who nominated it on Kindle Scout get a free copy of the book when it gets published.

The first ten titles from Kindle Scout will be released on March 3rd, 2015. Until then they are available for pre-order. The cost of each book ranges from $2.99 to $3.99.

Below is the list of Kindle Scout titles to be published:

Amazon mentions in the press release that 21 total books from Kindle Scout have been selected for publication, and that the remaining titles will be made available at a later time.

Amazon also gives some random but interesting numbers about the Kindle Scout program, with over 29,000 Scouts nominating titles.

Kindle Scout by the numbers: