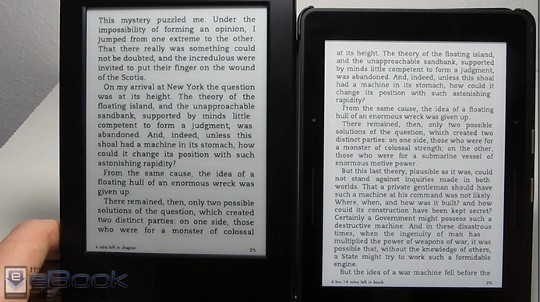 For this review I’m comparing the Kindle Voyage with the $79 entry-level Kindle. I put together comparison reviews for each one against the Kindle Paperwhite a long time ago, so I figured the high-end model and entry-level model needed to get their own turn as well.

I don’t think most people realize that they are the exact same from a software standpoint; the Voyage does not have one single software advantage for the extra $120+.

All that additional cost is going to hardware upgrades, which includes a 300 ppi screen, a frontlight, a flush capacitive touchscreen, and page sensor buttons.

All current E Ink Kindles run the same software and offer all the same settings, layout, fonts, and reading features. The only difference software-wise when it comes to the Voyage and $79 Kindle are a few extra settings to adjust the hardware features, like the page button sensitivity and frontlight brightness.

The one exception with the Kindle Paperwhite’s software is it still supports Kindle apps and games, which have been phased out on the Voyage and new Kindle Touch.

It should also be noted that the current lineup of E Ink Kindles all have the same processor and offer the same amount of storage space, so none has an advantage over another. They all operate and function at the same speed. Turning pages, opening books, searching is just as fast on the $79 Kindle as it is on the $289 3G Kindle Voyage.

Here are the nine main differences between the Kindle Voyage and the entry-level $79 Kindle.

More comparison info between these two Kindles and all the other models past and present can found on the Kindle Comparison Table.