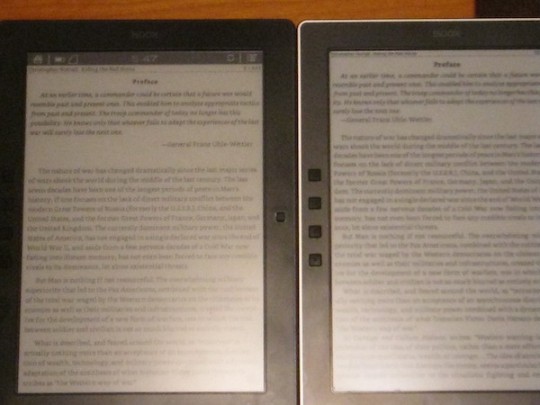 The Onyx Boox M96 is an Android-powered ereader with a 9.7-inch E Ink screen. Up until recently it was only available with a touchscreen that requires using a stylus pen for input.

Then toward the end of January the Onyx Boox M96C was released. The “C” means it has a finger-friendly capacitive touchscreen instead of the induction touchscreen that needs a specail stylus.

All the primary software and hardware features remain the same between the two M96 models; the touchscreen is the only real difference.

I already posted an M96 review for the regular version, so I’m not going to review the capacitive touchscreen version.

A few people that received the M96C have posted some first impression reviews over at MobileRead.

Unfortunately the capacitive touchscreen isn’t getting high remarks in the early reviews.

Here’s some of what azw409 had to say in his first impressions review regarding the screen:

The finger touch system is very poor in that it’s fussy and generally unresponsive – you have to press several times before it gets a hit on things like form fields. It’s particularly bad around the margins of the screen e.g. on the status bar.

If you want a large screen, my recommendation would be to go for the M96 with stylus rather than this one. I’m hoping that a future firmware update, for the M96C, will improve the touch system and contrast but both are not good considering this is a $350 device.

Capacitive touchscreens are a common problem with Onyx’s devices. The Boox T68 had a really poor touchscreen at first too, then a firmware update helped it some, but it still isn’t as accurate and responsive as other capacitive touchscreens. The same can be said about the Onyx AfterGlow 2. For whatever reason Onyx’s capacitive screens aren’t as good as other devices, like the Kindle for instance, so it’s not particularly surprising to hear people complain about the issue.

Another commenter chimed in about the touchscreens too:

I agree the touchscreen is quite unresponsive and inaccurate and annotating is quite difficult but I got used to it after a while.

Later on azw409 said the touchscreen does take some getting used to at first:

Having used the device a bit longer, I’ve got more used to the awkward touch system but really find myself using the hardware buttons where I can because the work every time.

Hopefully a firmware update can improve the touch responsiveness somewhat like the T68, but overall Onyx’s implementation of capacitive screens clearly needs some work.

The second issue brought up in early reviews is the fact that the capacitive layer does indeed degrade the contrast of the E Ink text, as many of us suspected it would. Any time you add a layer over E Ink, now matter how thin and transparent it is, contrast is negatively affected to some degree. It doesn’t sound like it’s a big deal with the M96C, but there is a noticeable difference.

In a quick review comparing the M96C and regular M96, EldRick had this to say:

While the screen isn’t much dimmer than the M96, it is a little more yellow, and the contrast is slightly less.

One cosmetic difference between the two models is also noted in the review. The M96C does not have the silver reflective border.

Also, some programs operate differently – with CoolReader, the Next Page and Previous Page buttons are reversed, and, of course, the Full Page option does not work to get rid of the Annoying Status Bar.

The picture at the top of this post was from EldRick’s review. It’s hard to tell much difference from the pic but there does appear to be a slight difference in the screen background color. It does look a little more yellow and darker on the M96C (left) and that’s how I’d describe the tone on the T68 compared to the regular M96 as well.

There’s no question the capacitive touchscreen on the M96C makes interacting with the device faster and easier over using a stylus, but like most things there are some drawbacks as well. While more convenient than using a specialized stylus, touch responsiveness and accuracy aren’t as good, and text contrast goes down some too.