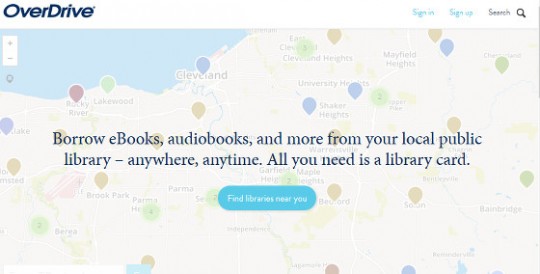 There’s big news in the ebook industry today. Rakuten has announced that they are purchasing OverDrive for 410 million dollars in cash. The acquisition is expected to be finalized next month, April 2015.

OverDrive is the leading platform for ebook and audiobook lending to public and school libraries, with over 30,000 supported libraries worldwide.

Rakuten, a major Japanese e-commerce retailer, looks to increase their share of the ebook market even more.

As you probably remember, Rakuten bought Kobo back in 2012 for 315 million dollars.

Takahito Aiki, Head of Rakuten’s global ebook business had this to say in the press release: “OverDrive’s deep content library and relationships with publishers, libraries, schools, and retailers will allow Rakuten to extend our mission of empowerment to new market segments and accelerate the growth of our digital contents businesses.”

Moving forward, OverDrive will operate as a subsidiary of Rakuten, and OverDrive’s press release states that they intend to work closely with other Rakuten companies.

This could mean good things for Kobo users. Right now getting ebooks from libraries onto Kobo ereaders is kind of a pain in the neck. You have to download library ebooks to a computer and run them through Adobe Digital Editions to transfer it to a Kobo old school style with a USB cable.

Hopefully OverDrive will work with Kobo to make the ebook borrowing process more user-friendly like it is on the Kindle, where you can easily have library ebooks wirelessly delivered without dealing with ADE or connecting to a computer.

Speaking of Kindle, you have to wonder what kind of implications this could have on Kindle library books moving forward now that the service that provides library lending is owned by one of Amazon’s main competitors in the ebook market (and other markets too).

But I don’t think Kindle library ebook users have much to worry about. Offering Kindle books obviously is a big part of the revenue stream for OverDrive. From a business standpoint, it doesn’t make very much sense for Rakuten to cut off all Kindle income by deciding not to remain partners with Amazon and discontinuing Kindle library books. If anything, they’ll probably try to find a way to increase sales of Kindle library books.

After all, people aren’t going to all stop using their Kindles if library ebooks suddenly go away and go running to Kobo for rescue. That’s the kind of bone-headed move B&N would make, not Rakuten.