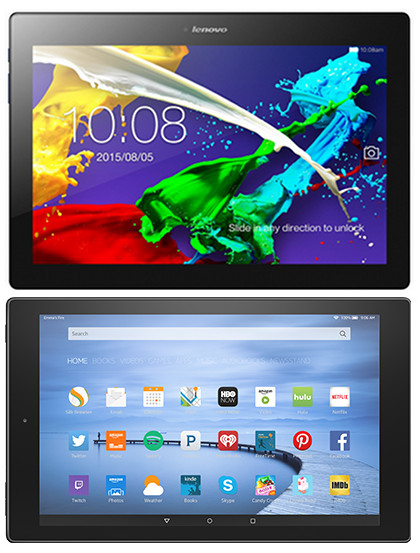 Ever since Amazon released their new 10-inch Android tablet, the Fire HD 10, I’ve been saying that it isn’t a good buy. There are better tablets on the market for the money, namely the Lenovo Tab 2 A10 tablet.

I just posted a Lenovo Tab 2 10 review a couple days ago, and there’s no question that it has the Fire HD 10 beat every which way. The specs are superior, the operating system is more open and customizable, and the price is considerably less.

The Fire HD 10 only has a few advantages in that it is directly tied to Amazon’s ecosystem, and that includes a few exclusive perks.

On the surface the Fire HD 10 looks like a pretty decent tablet. But there are two big cons, the low resolution screen and the price.

The Fire HD 10 has the lowest resolution screen that you’re going to find on a tablet in this day and age. At 1280 x 800, it has 149 pixels per inch. To put that in perspective, the Kindle Paperwhite 3 has 300 ppi and the older generation Fire HDX tablets had over 320 ppi. Even the very first Kindle Fire tablet had 169 ppi.

The thing is, Amazon priced the $49 Fire tablet so low that I think they are trying to make up for it by charging more for the Fire HD 10 than what it’s really worth.

Note: I thought the Fire HD might have had an advantage with support for 128 GB microSD cards; Lenovo doesn’t specify if 128 cards work but it turns out there are memory cards made specifically for the Tab 2 10 at Amazon up to 200 GB.

In my opinion, the 10-inch Lenovo Tab 2 10 is a much better tablet than the new Fire HD 10 because of the higher resolution screen and boost in specs, the open Android OS with Google Play support, the 2 hour longer battery life, and the fact that it costs less.