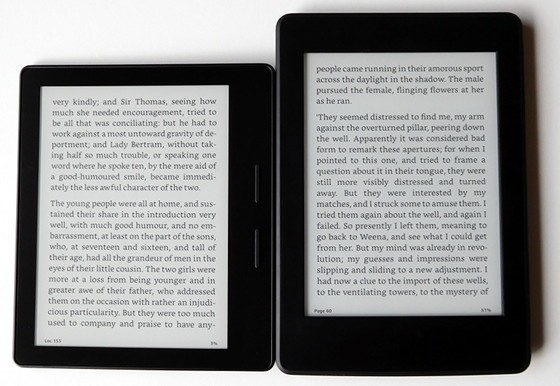 Now that Amazon has released the Kindle Oasis, let’s see how it stacks up against the much cheaper Kindle Paperwhite 3 for this comparison review.

When it comes right down to it there aren’t very many differences between the two ereaders other than the design and the price. Both provide access to the same exact books and the same exact Kindle reading software.

The hardware is also very similar between the two units. In fact the most important part, the screen, is the exact same.

Most people aren’t going to be willing to spend $300 or more for the Kindle Oasis when they can get a Paperwhite 3 for $99 on sale, but the Oasis does have some notable advantages that clearly make it the better Kindle overall.

Whether those advantages are worth the premium price is up to you. Either way it’s good to have options with four different Kindle models currently available, more choices than in the past.

In addition to this review, there’s also the Kindle Comparison table for an outline of the different specs between all the various models.

When it comes to comparing the software on the Kindle Oasis and Kindle Paperwhite, there’s nothing to say.

There are just a couple of minor differences to accommodate the new design on the Kindle Oasis. It shows a battery percentage on the quick settings menu when the charging cover is attached, and there’s an added option in the settings menu to swap forward and back for the page buttons.

Both Kindles have the same 6-inch 300 ppi E Ink Carta display. Like with the Kindle Voyage, the Kindle Oasis has a slight edge over the Paperwhite in terms of text clarity.

The Paperwhite has a plastic layer over the screen for the light layer whereas the Oasis has a glass screen. The difference is very minor but the Oasis does appear to have slightly clearer and darker text upon close inspection.

Both Kindles have the same processor and the same 4GB of internal storage space. Both also have 2-point capacitive touchscreens, Wi-Fi, optional 3G, and frontlights.

There are three main differences when it comes to comparing the Kindle Oasis with the Kindle Paperwhite, aside from the price, and a couple of minor differences:

#2. Page Buttons – The Oasis adds dedicated page buttons on one side of the screen. The device also has an accelerometer to rotate the screen so that you can use the buttons with either hand. The buttons also work in landscape mode, unlike on the Voyage. There’s an option in the settings menu to switch which button pages forward and back.

#3. Charging Cover Included – The Kindle Oasis comes with a leather cover that has a battery built-in to charge the ereader since it had most of its battery removed to decrease weight—that’s why the cover is required. The cover comes in walnut, merlot, and black colors.

#4. Frontlight – The Kindle Paperwhite’s frontlight has 4 LED lights at the bottom of the screen and the Kindle Oasis has 10 LEDs along the side of the screen. The Oasis’s frontlight is brighter and it’s a touch more even with the extra LEDs, but overall the frontlights are very similar in appearance. Both have a bit of shadowing like all frontlights but nothing major. One difference is the Oasis’s light actually turns off completely at the lowest setting—that’s a first for a Kindle.

#5. Battery Life – Amazon says the Paperwhite 3 can last up to 6 weeks per charge and the Oasis with the cover can last up to 8 weeks. But their battery life equations are so convoluted that it probably only equates to a few hours difference. Not a bit deal unless you’re away from an outlet for a few weeks.