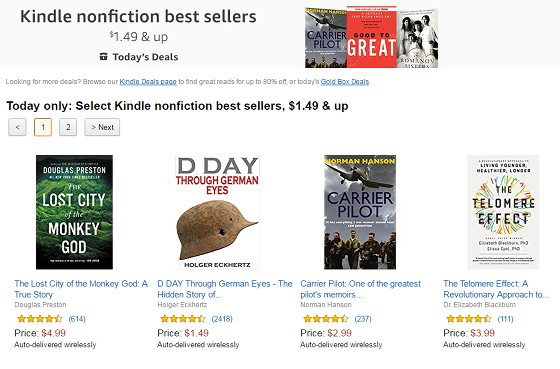 Amazon is having another 1-day only sale on a list of Kindle ebooks for one of their main Deals of the Day.

There are lots of highly-rated books on the list so the sale is worth checking out.

Amazon also continues to have refurbished Kindles marked down.

It looks like $84.99 is the new permanent price for the refurbished Kindle Paperwhite, as it’s been at that price for the past couple months now. That remains the best deal around for a frontlit ereader with a 300 ppi screen.

Perhaps that means they’re trying to clear out old stock before the new waterproof Kindle Paperwhite gets released.

The refurbished Kindle Voyage starts at $152, but that’s the price it always goes for.

They also have the previous generation refurbished Kindle marked down to $56, a bit less than usual. But you might as well wait for the current model to go on sale again for $59, which will probably happen soon with Mother’s Day coming up in two weeks.