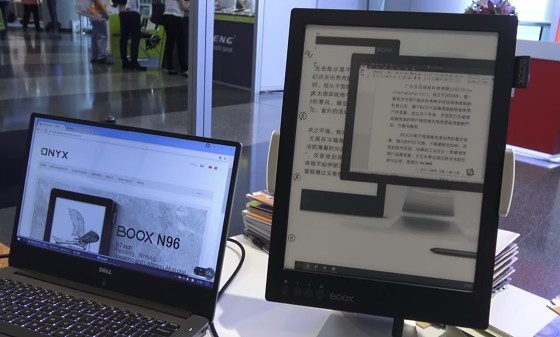 In fact the Onyx Boox Max 2 is already selling from a website in China called TMall, but it doesn’t appear to be available from any other Onyx distributors yet.

The Max 2 adds a capacitive touchscreen and micro HDMI port, and it has a quad-core processor and 2GB of RAM, with 32GB of storage space.

They’ve updated the software to Android 6.0 as well, up from Android 4.0 on the older models.

Another couple of YouTube videos were recently uploaded showing the new Onyx ereaders in action.

The videos aren’t much different than the last set of videos. In fact they’re about 90% the same, but at least some progress is being made with the Max 2 now available to order.

Thanks to the HDMI port the Max 2 can double as a secondary computer monitor, but so far it looks pretty slow in the videos, much slower than the Paperlike Pro.

It’s still unclear what the final specs will be on the 10.3-inch Boox Note, as they seem to keep changing things, but some specs are outlined in the video.