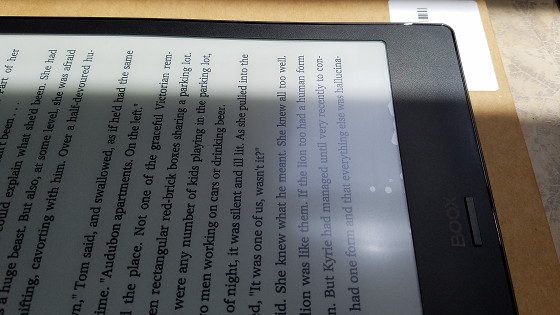 So a few weeks ago Onyx started selling screen protectors for the Onyx Boox Note and the Onyx Boox Max2 after some reports of the stylus leaving marks and scratches on the screen (I saw this firsthand with the Onyx Max2).

Luckily there aren’t any scratches on my Note’s screen so there must be some other variable involved, but it certainly is happening to some screens.

Either way it’s probably a good idea to use a screen protector on any device if you plan to write on the screen a lot.

I finally got around to installing Onyx’s screen protector on the Onyx Boox Note today and I’m disappointed with the result.

I knew things weren’t going to go well when I pulled the screen protector out of its packaging and it had a dead bug smashed in the center. Luckily it was on the outer layer and not between the adhesive layer, but it sure was a weird-looking little critter.

I carefully applied the screen protector, using a credit card to push away bubbles, as I’ve done many times before, but the problem is it’s just simply impossible to get rid of all the bubbles. You can get most of them but not all of them.

The main problem is the edges of the screen protector aren’t adhesive enough. There are several spots along the edge that simply will not stick down.

At $5 for one screen protector you expect it to install properly. I recently put a screen protector on my phone and it went on flawlessly without a single bubble or bad spot (and it cost $7 for a 5-pack).

One thing I do like about the Onyx screen protector is it has a slight bit of texture to it so it’s not quite as slick as the actual screen. But the bubbles are annoying and create shiny spots that catch the light so I’d rather go without a screen protector than put up with the distraction.

The reviews at Amazon say the same thing so it’s clearly not an isolated issue.

Update: After further use, I’ve come to the conclusion that I definitely like the Onyx Note better with the protector than without. The matte layer adds a nice bit of texture that feels nice and makes writing feel a little more natural. I still think it needs to have better adhesion along the edges but I hardly even notice the bubbles anymore since they’re so close to the edge.