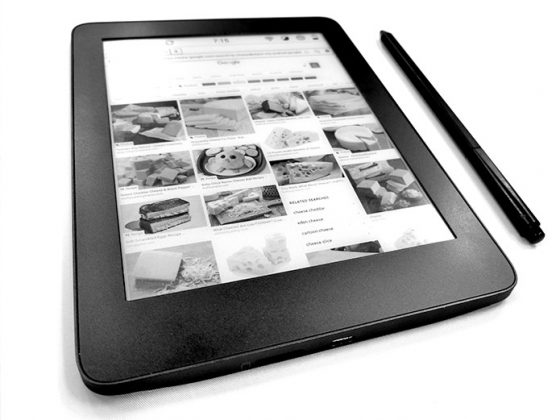 A new E Ink ereader and digital notepad has turned up on Indiegogo, a crowdfunding website. It’s being developed by a company called Team UC.

The device is called the MobiScribe. It comes with a 6.8-inch E Ink Carta screen with a frontlight and it includes a stylus pen for writing notes on the screen.

It has a Wacom touchscreen with support for 4096 levels of pressure sensitivity, along with a capacitive touchscreen for finger touch.

It runs software based on Android 4.4.

It clearly has an ebook app but they don’t bother to mention anything about it or what formats it supports, other than PDFs.

The specs are old school by Android ereader standards. It has a 1GHz Freescale processor with 8GB of internal storage space and 512MB of RAM. It has a memory card slot, WiFi, and the frontlight has adjustable color temperature.

The MobiScribe is selling for $199 and it is expected to ship in February.

The Team UC website also shows a 13.3-inch model but apparently it’s not available yet. You’re probably better off just getting one of Onyx’s devices anyway. Who knows if Team UC is going to keep up with software developments. That appears unlikely if they’re starting out with older Android 4.4 software instead of something newer like Onyx’s 6.0 software.