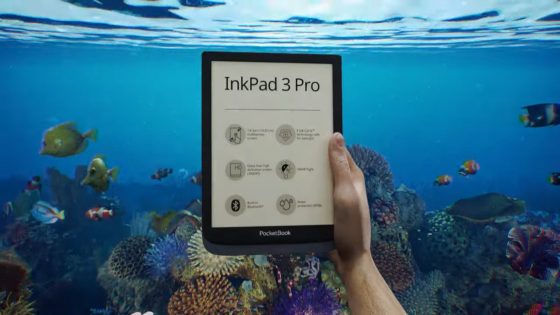 PocketBook is releasing a new “Pro” version of the Pocketbook InkPad 3 that looks pretty interesting.

It’s mostly the same as the previous model, except they added Bluetooth support and they made the device waterproof, with an IPX8 rating, meaning it can withstand being submerged in 2 meters of water for up to 60 minutes with no ill effects.

They also doubled the internal storage space to 16GB, but unfortunately they removed the microSD card slot.

Like the InkPad 3, the Pro version features a 7.8-inch 300 ppi E Ink Carta screen, and it has a frontlight with adjustable color temperature, which Pocketbook calls a SmartLight.

It has a dual-core processor and 1GB of RAM, with a 1,900 mAh battery. It has Wi-Fi and can sync with the PocketBook Cloud and Dropbox.

The device supports 19 ebook formats, including ePub and PDF, plus a few image formats (JPEG, BMP, PNG, and TIFF) and audio formats (mp3 and m4b).

Unfortunately Pocketbook doesn’t sell their devices in North America but it looks like a nice ebook reader if you can get your hands on one.