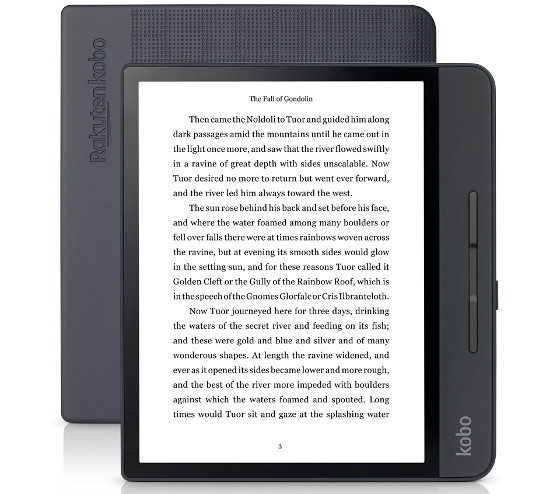 Granted that’s only $15 off the regular price of the Kobo Forma, but if you have an Amazon rewards card you can get an additional 5% back as well, and since Kobo never puts the Kobo Forma on sale themselves getting it from a 3rd party seller is the only way to get a discount.

The 8GB version of the Kobo Forma originally sold for $279 when it was first released in fall of 2018.

The Kobo Forma is unique because it’s the only dedicated ebook reader with a flexible 8-inch E Ink screen. The flexible screens are lighter and a lot more durable than regular E Ink screens that have a thin glass backplate.

It’s surprising no other devices are using this same screen yet. After Kobo released the Aura One with a 7.8-inch screen, several others ereaders started coming out with the same screen soon after, and now, ironically, Kobo doesn’t use that screen anymore on any of their current models.

Anyway, the Kobo Forma is one of the best Kindle alternatives for a dedicated reading device. It has a frontlight with adjustable color temperature, page buttons, it’s waterproof, OverDrive support is built-in, and it has a larger screen than the Kindle Oasis, while costing less.

See my Kobo Forma review for more details about the device and to see it in action.