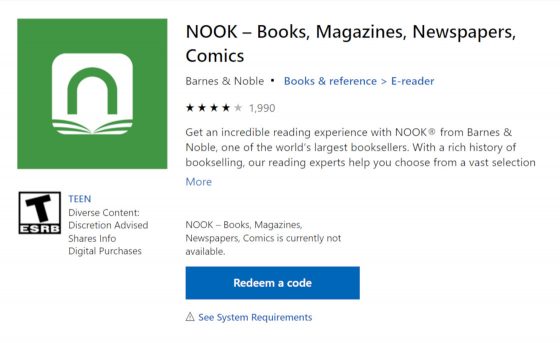 It looks like Barnes and Noble has found a new way to screw over Nook customers without the courtesy of an explanation.

The Nook for PC app is no longer available to download from the Windows store, despite the fact that Barnes and Noble is still advertising that Nook books are supported on Windows PCs.

The page for the Windows Nook app is still up on the Microsoft Store, but it says the app is currently not available and there is no download option.

Apparently the app still works if you already have it installed, so maybe they just took the app down temporarily to fix something, but considering B&N’s past behavior it’s hard to give them the benefit of the doubt.

The Nook for PC app has been unavailable for at least the past week and a half now.

The worst part is Barnes and Noble is still claiming that Nook books are supported on Windows computers, but that clearly is not true. At this point they are outright lying to customers.

On the product pages for Nook books it says they are compatible with Nook for PC, and their mobile apps page still advertises the Nook app for PC on the Windows Store. But the Nook Windows app is no longer available so what are they talking about?

This is just the latest in a long list of things that Barnes and Noble has done to estrange Nook customers, from partitioning storage space on Nooks to limit sideloaded content to removing the ability to download purchased ebooks for backup.

Hopefully this is just a temporary removal but with Barnes and Noble you never know what to expect.