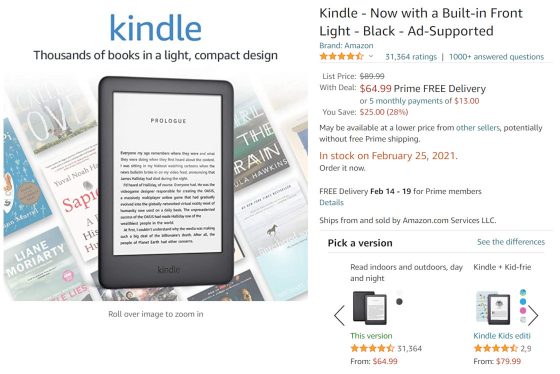 I’ve said it before and I’ll say it again: There’s something weird going on with the entry-level Kindle.

It seems like every time Amazon puts Kindles on sale the entry-level model becomes instantly unavailable for several weeks. At some point you’d think they would get enough to keep up with demand.

They don’t seem to have as much of a problem keeping the Kindle Paperwhite in stock during sales so it can’t be a supply issue, and Amazon clearly sells way more Paperwhites than entry-level models based on reviews and rank.

All the different variations of the base Kindle are currently in stock on Amazon UK and Amazon Canada, but it always just happens to be on backorder in the US whenever there’s a sale.

One day after Amazon put Kindles on sale for Valentine’s Day all the black variants of the entry-level model were already out of stock for the next few weeks; you can still get a white one but they go in and out of stock frequently.

It was the same story two months ago in December the last time Kindles were on sale.

I wonder if they’re experimenting with the idea of doing away with the cheaper model entirely and just having the Paperwhite be the only 6-inch model. There really isn’t a big price difference between the two, only $30 when on sale, and the Paperwhite has a better screen.

Are they purposely trying to steer people toward the more expensive Kindle Paperwhite? The same pattern keeps repeating itself so it can’t just be a coincidence.

Perhaps they’re getting set to release a new model again since it’s been nearly 2 years since the last entry-level model was released, so maybe that’s why availability is waning, but that seems unlikely given Amazon’s complacency toward Kindles over the past half decade. I think it’s more likely that new Kindle releases will start becoming less frequent. But that doesn’t explain why Amazon can’t keep the basic Kindle in stock.