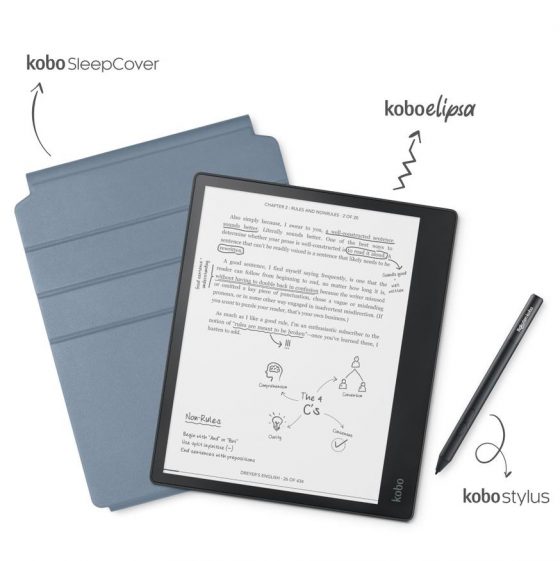 Today Kobo official announced the upcoming release of a new 10.3-inch ereader and e-notepad device called the Kobo Elipsa. They are selling it as part of a pack that comes with a sleepcover and a stylus.

The Kobo Elipsa is available to pre-order from Kobo’s website for $399 with free shipping. The official release date is set for June 24th. It’s not listed on Walmart’s website yet, but they’ll probably have it closer to release day.

The Kobo Elipsa is Kobo’s first 10-inch ereading device. They are marketing it more as a notepad than an ereader but it can be used as both. You can write on ebooks and PDFs, and it comes with a new note app that can import and export to Dropbox.

One interesting detail is it appears it does not use a Wacom touchscreen like most other e-notes, so that’s probably how they managed to keep the price down. Kobo doesn’t give any specifics but the stylus has a AAAA battery so it’s not a Wacom stylus because they don’t require batteries. The stylus has two buttons, one for erasing and one for highlighting. It also has replaceable tips and it supports pressure sensitivity.

The sleepcover doubles as a stand to get a better angle when reading and writing, and it has a slot to hold the stylus on top.

All in all the Kobo Elipsa looks like a pretty nice device for the price. It doesn’t have as much going for it as the Onyx Note Air, but it’s a better deal than the Remarkable 2 considering it comes with Kobo’s superior ebook software, a sleepcover, and it adds a frontlight. Check back next month for a full review!