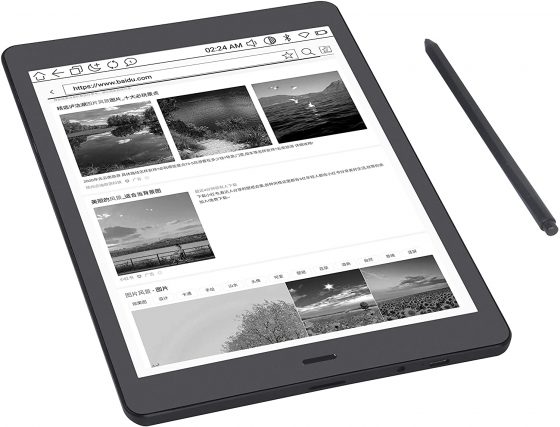 It looks like another company has jumped on the e-note bandwagon. New dedicated ereaders are a rarity these days but a number of companies are coming out with E Ink notebooks that also double as ereaders.

The Geniatech KloudNote has turned up for sale on Amazon for $449. It ships from China so delivery is several weeks away.

It has a flexible 10.3-inch E Ink Mobius screen with 227 ppi, but it does not appear to come equipped with a frontlight unfortunately.

The specs say it has an electromagnetic touchscreen (Wacom) with 4096 levels of pressure sensitivity and it comes with a stylus.

The Geniatech KloudNote has a quad-core CPU, 2GB of RAM, and 32GB of storage space, with dual-band WiFi and Bluetooth 4.2.

It also has a USB-C port with OTG support, along with a 3.5mm headphone jack and a speaker and mic. The back button below the screen is equipped with a fingerprint sensor. Battery size is 4000mAh, and the device weighs in at 385 grams.

The software is based on Android 8.1, but there’s no mention of it coming with Google Play or installing apps. The interface looks a lot like Onyx’s software.

It’s nice to have more options but I don’t see any compelling reason to buy the Geniatech KloudNote over more established products like the e-notes from Onyx. Even the Kobo Elipsa has a frontlight and it costs $50 less.