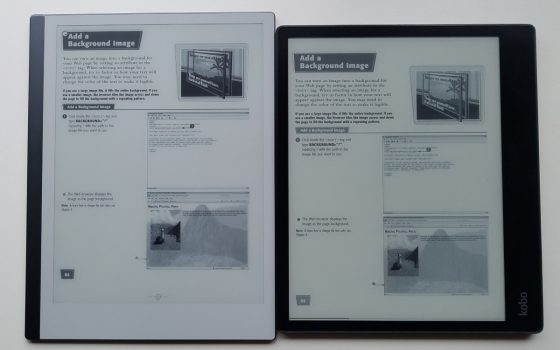 On Kobo’s product page for the Kobo Elipsa they say it “is the first to feature Carta 1200 E Ink technology for a faster display, quicker page turns, and deeper contrast.”

That all sounds great so naturally the first thing I did when my purchased Kobo Elipsa arrived yesterday was closely examine the screen.

When I first powered up the Elipsa and loaded an ebook my first thought was the screen looks great. I really like having Kobo’s advanced font and layout options on a 10-inch ereader—it’s a better reading experience than using Android apps that aren’t even designed for E Ink screens like with most other large-screen ereaders.

Then I compared the same PDF on the Onyx Note2, which has the same resolution as the Kobo Elipsa but is uses a flexible Mobius screen instead of a glass-based Carta screen. It’s hard to see much of a difference at all when it comes to text contrast and background color, but when it comes to things like images and bold headings the black ink is noticeably darker on the Kobo’s screen, so it would seem there is some merit to E Ink’s claim of better contrast.

However, I then compared the Kobo Elipsa with the Remarkable 2, which apparently has the earlier E Ink Carta 1000 screen if the Elipsa is the first to have the 1200 screen, and I was surprised by the result.

When compared side-by-side it looks like the Remarkable 2 is the one with the upgraded screen. There’s no question about it. The background is noticeably lighter and text and images look darker, despite what E Ink says about newer Carta 1200 screens having better contrast.

Not only that but the Remarkable turns pages faster when comparing the exact same PDFs, so just because the new screen has 20% faster response times doesn’t actually mean it’s faster.

I think the contrast difference all comes down to the extra layers that are added over the top of the E Ink screen so improved contrast of the screen itself doesn’t mean anything if the added layers are lowering contrast. The Kobo Elipsa has a frontlight, which is great, but the added layer clearly has a negative affect on contrast compared to the Remarkable 2 without a frontlight layer.

They might use different capacitive touch layers as well, and the Elipsa has a heavy paper-like texture on the screen that feels nice but probably lowers contrast a bit more as well.

Don’t get me wrong, I actually think the screen on the Kobo Elipsa looks great, but I can’t help but point out E Ink’s glorified marketing claims once again. In no way does the Carta 1200 screen on the new Elipsa look like it has better contrast than the older screen on the Remarkable 2 (quite the opposite, in fact), and currently response times are a bit slower, which proves that is more determined by software than hardware.

I’ll upload a 4k video during the review process to show the differences with the screens. It doesn’t show up very well in pictures. It’s not a big difference by any means, but it is readily apparent in person.