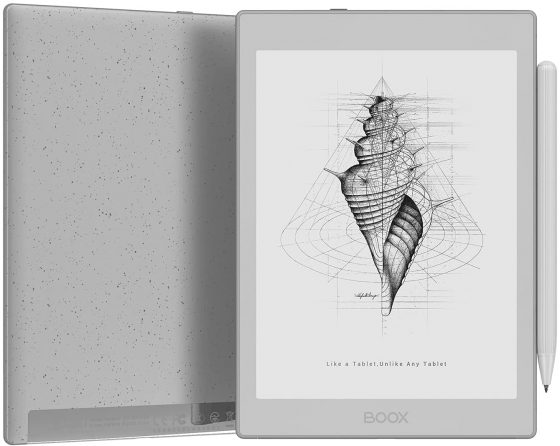 The Nova Air was released last month with Onyx accepting pre-orders from their website, and now that they’ve started shipping the Nova Air, it’s now available via Amazon as well for $349 with free shipping.

Onyx is also selling the upgraded Nova Air Magnetic Cover for $59.99. The cool thing about it is it adds page-turn buttons and it attaches to the Nova Air using a magnet.

Both can be purchased together as part of a Nova Air bundle package for $409.

Functionally, the Nova Air is basically a carbon copy of the previous Nova3, as the specs and OS appear to be unchanged, but the Nova Air has an updated design and a new stylus. The biggest change is they added magnets to the sides to hold the stylus and to attach the new button-equipped cover.

The Nova Air is also 30 grams lighter than the Nova3, but that comes at the cost of battery life because the Nova Air has a smaller battery (2000mAh vs 3150mAh).

As far as specs, it has a 300 ppi E Ink Carta screen with a frontlight that has adjustable color temperature. There’s 32GB of storage space built-in, with 3GB of RAM, an octa-core CPU, Bluetooth, WiFi, and USB-C with OTG support. It also has dual speakers and a microphone, and it uses a Wacom touchscreen with support for 4096 levels of pressure sensitivity.

Like Onyx’s other devices, it runs software based on Android 10 and it comes with Google Play for installing apps. The built-in reading app supports a bunch of formats as well, and it’s really good for PDFs.