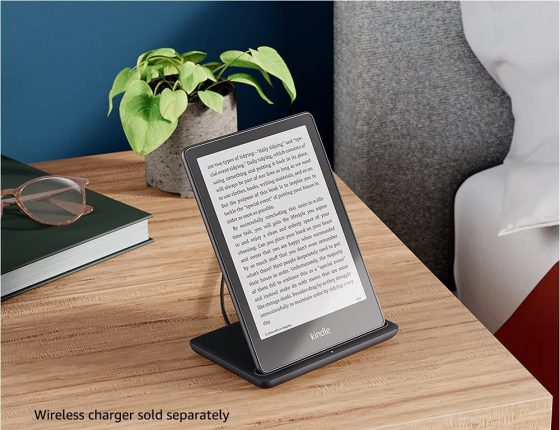 Amazon’s new 6.8-inch Kindle Paperwhite starts shipping this week, and there are some differences with the new model regarding charging times and chargers that can be used.

The Kindle Paperwhite Signature Edition is the first Kindle to support wireless charging. You can still charge it using the included USB cable if you’d like, but it also supports using Qi wireless chargers, which typically sell for $10-$20, and Amazon offers a wireless charging dock for $29.99 that also doubles as a stand.

Before buying a Qi wireless charger, make sure it’s not on this list of incompatible chargers. Also note that only the Signature Edition supports wireless charging.

Below are Amazon’s estimated charge times for the new Kindle Paperwhite:

As noted on the list, Amazon now recommends using a 9W charger for the new Kindle Paperwhite. If you bought a USB wall charger for an earlier Kindle, it’s most likely the 5W version. The 5W version will still work fine; it’ll just take longer to charge.

If you’re buying a new USB power adapter for your Kindle Paperwhite make sure to get the 9W version for faster charging. Amazon sells both and they cost the same so it makes no sense to get the 5W version anymore.

You can usually just use whatever USB power adapter you have laying around and it will work fine to charge your Kindle. In the box Amazon includes a USB cable for charging, but they do not include power adapters with Kindles for some reason, despite including them for free with all Fire tablet purchases.