Here’s a list of ten free highly-rated Kindle ebooks across several different genres for the weekend.

Amazon also has a list of Kindle ebooks on sale for one of their Top Deals of the day, as they often do on Sundays.

Please keep in mind the free Kindle books listed below are free as of March 13th, 2022. Most of these titles are free for a limited time only and will expire in the next few days or hours before going back to the regular list price.

And Then She Vanished by Nick Jones

Still haunted by the disappearance of his little sister, Amy, over twenty years ago, Joseph Bridgeman’s life has fallen apart. When a friend talks him into seeing hypnotherapist Alexia Finch to help with his insomnia, Joseph accidentally discovers he can time travel. His first trip only takes him back a few minutes, but his new-found ability gives him something he hasn’t felt for the longest time: hope…

Would You Die For Her by Linda S. Prather

When Angelina Clark’s body is found painted, gutted and hanging from a tree in Savannah, Georgia questions resurface and somewhere deep inside Dakota Dale’s tortured mind she knows Christian Salyer is still alive. The news media had portrayed Dakota as a jilted girlfriend who’d used the deaths of eight young women to seek revenge on her lover. Eight young women who’d been tortured, painted crimson from neck to toes, gutted and left hanging from a tree to die…

How Much I Feel: Miami Nights Series by Marie Force

Babysitting a handsome, arrogant neurosurgeon isn’t how I imagined my first day at Miami-Dade General Hospital. After the tragic loss of my husband, I’ve focused on starting my dream career. Dr. Jason Northup isn’t going to mess up my plans, even if he makes my lady parts stand up and say hello. He checks every box on my cliché list. However, my heart—and other parts—don’t seem to care about clichés… 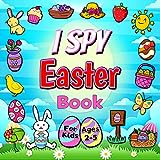 Celebrate Easter with this adorable I Spy Easter Game book full of Easter themed Eggs, Easter Bunnies, Flowers, Spring Elements, and other cute designs for All 26 letters in the English alphabet. Featuring every kid’s favorite pastime activity – The game of “I Spy With My Little Eye”! All 26 letters from A to Z have a riddle for the little ones to guess and enjoy…

The Case of the Waffling Warrants by Rosie A. Point

For ex-spy Charlotte Mission, life in the cozy town of Gossip, Texas, is anything but boring. With a retired spy grandmother for company, an inn to clean, kittens around every corner, and guests to keep happy, she’s living a perfectly normal life. But Charlotte has a secret. She’s Gossip’s first and only ‘fixer.’ With her particular set of skills and a secret armory at her disposal, Charlie’s the person folks around town come to when they’re in deep, seemingly irreversible trouble. And after the owner of the local bakery is slapped in cuffs on trumped-up charges, she’s on the job…

All’s fair when you’re in love with War. For seventeen-year-old Mia Ahlström, a world ruled by order is the only world she allows. A lifetime of chore charts, to-do lists and study schedules have helped earn her a spot at Redwood State University’s engineering program. And while her five year plan includes finding her very own happily-evah-aftah, years at an all-girls boarding school left her feeling woefully unprepared for keg parties and co-ed extracurricular activities…

The Law Partners by John Ellsworth

Michael Gresham is a criminal attorney who defends his clients with an iron will. They know that when he takes their case they are probably going to leave the courthouse a free man or free woman. But what happens when the defender becomes the defendant himself? A law partner will have to step up and do for him what he can’t do for himself. Isn’t that how it should work?

The tiny town of Penance has a big vampire problem—and charmslinger Gracie Boswell aims to be the solution. A whole nest of vampires makes for a mighty fine bounty, though, and Gracie is far from the only charmslinger angling for the job. When a charming local layabout and an old competitor elbow their way into Gracie’s posse, she’s forced to at least pretend to play nice…but trust is scarce in the west, and smart bounty hunters always sleep with one eye open…

For everything there is a season… Once the star student of her training class, Captain Liz Laika is now an outcast, a casualty of family scandal. Now stuck in the worst post in the Fleet, she should keep her head down. But when a Cerulean passenger is found decapitated, and Liz is framed for the murder, she has no choice but to fight for her life. No easy feat when she’s facing kidnapping, ship-eating whales, horse-sized spiders and corrupt fleet officers with personal vendettas. And in the middle of the intergalactic murder drama, her ex-fiancé reappears. Captain Liz needs to clear her name–and fast.

The Honeymooner by Melanie Summers

I’m Libby Dewitt and I live by the motto: “if you fail to plan, you plan to fail.” I’m finally about to start my dream life with my steady-as-a-rock fiancé, Richard Tomy. Together, we’re the perfect power couple—right down to the fact that he’s agreed to use our honeymoon to help further my career in mergers and acquisitions. But ten minutes before the wedding, my dreams dissolve via text message. Devastated and humiliated, I escape to Paradise Bay alone with two goals for my trip: to devise a plan to get Richard back, and to convince resort owner Harrison Banks to sell his property to my company…