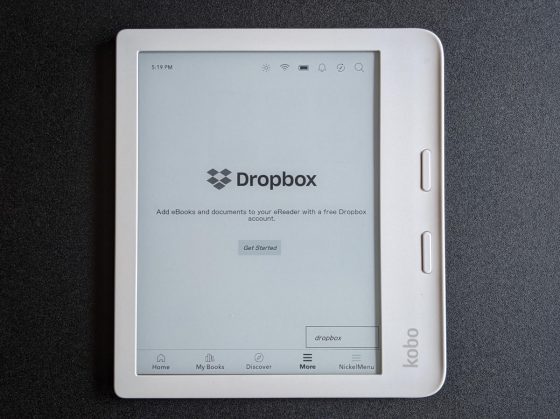 Kobo has this weird thing where only some of their ereaders support transferring files wirelessly using Dropbox, but it turns out there’s an easy way to add Dropbox support to other Kobo models as well.

I’ve seen this mentioned a few different places so I thought I would give it a try and it does indeed work, and it only takes a couple of minutes.

Only the Kobo Forma, the Kobo Sage, and the Kobo Elipsa officially support Dropbox, but with this simple hack you can add Dropbox support to other models too.

Apparently the Dropbox functionality is built-in to Kobo’s software, but only the aforementioned models have a way to access Dropbox.

The simple solution is to add a link to Dropbox on non-supported models using NickelMenu, a custom tool designed to launch hacks and access hidden features and settings on Kobo ereaders.

Follow the NickelMenu link above for the download link and directions on how to install it. It’s as easy as manually installing a software update. Basically just do the following:

1. Connect the Kobo to your computer using a USB cable.

2. Download the latest version of NickelMenu from Github and place the file in the .kobo folder on your ereader.

3. Eject the Kobo ereader from your computer and then wait for it to restart. Once it’s done you should see a new entry for NickelMenu on the main menu. It will be empty at first because you have to add entries to it, like Dropbox, for example—see here for directions on how to configure NickelMenu (it may seem a bit complicated at first but you can move onto step #4 and #5 if you just want to add Dropbox).

4. Reconnect the Kobo to your computer and create a new text file called config and place it in the following location so the path is like this: KOBOeReader/.adds/nm/config.

5. Open the config file and add the following code: menu_item:main:dropbox:nickel_open:library:dropbox
Then save the file and safely eject your Kobo from the computer once again and now you should see a Dropbox link from NickelMenu.

I’m not an expert on this by any means and know next to nothing about configuring NickelMenu, but it was easy enough to follow the directions at MobileRead. I’m not sure exactly which models this does and doesn’t work on, and it sounds like you might need to add a hyperlink to Dropbox in the Kobo eReader.conf file on some older models.

If you encounter any problems or have any questions make sure to check these two threads:

And here’s the page at Kobo with directions on how to add books to Kobo ereaders using Dropbox.