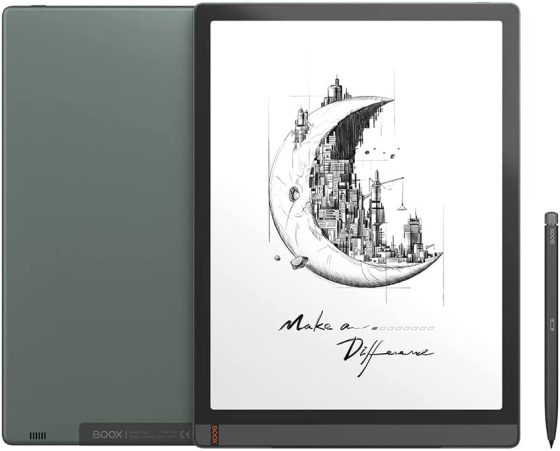 Last week I posted about a new Boox Tab X with a 13.3-inch E Ink screen that was mysteriously available to purchase on Amazon even though Onyx hadn’t announced such a device existed yet, but now Onyx has officially released the Tab X and the full specs are listed below.

The Tab X is basically a newer version of the Max Lumi2 that adds Onyx’s new GPU acceleration feature to improve the refresh rate of the E Ink screen.

Onyx also claims the touch layer is 50% thinner so that results in a clearer screen, and they added a rotation sensor and increased the size of the battery, but most of the other specs are the same as the Lumi2, and it sells for the same price at $879.

The Tab X is essentially a larger version of the Boox Tab Ultra that was released in November, but it has a flexible Mobius screen for increased durability, and it lacks the protruding camera on the back. The Tab X also has more RAM with 6GB (versus 4GB on the Tab Ultra), except it lacks the memory card slot that comes on the Tab Ultra (but it does have 128GB of internal storage space and it supports expandable storage via USB OTG).

Onyx use to advertise their 13.3-inch models as being able to plug into a computer to use them as a secondary E Ink monitor, and they use to have HDMI ports, but Onyx no longer mentions monitor support being a feature anymore. I wonder if it’s still possible using USB C?