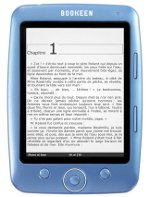 As usual with Bookeen’s ereaders, there two versions of firmware available, one for Adobe DRM ebooks and one for Mobipocket DRM ebooks (Mobipocket doesn’t allow Adobe support in conjunction with Mobi on a single device).

The updates include some new features, bug fixes, and expanded language support. The updates can be downloaded from Bookeen’s website. The page requires an account and login to view, so for everyone else here’s the complete list of feature improvements and updates for the new software:

Side buttons (Cybook Opus)
Side buttons can be flipped (“Advanced…” menu), allowing one hand page turns with thumb on lower button (portrait modes only).

Bug fix (Cybook Opus)
Under some circumstances, accelerometer would stay in suspend mode and would not unlock until deactivated and reactivated.

Mobipocket dictionaries
Faster accesses in “Lookup” mode.
Note: dictionaries must be located at the root of folder “eBooks”.