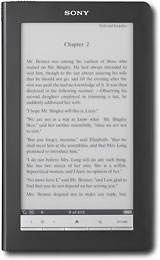 Looking around the internet, there are a few different ebook readers currently on sale.

First, the Sony PRS-900 is selling for $249 from Amazon, Best Buy, and a few other electronics stores. That’s $50 less than it usually sells for and $150 less than its original price back in December.

The Cybook Opus is down to $168 at B&H Photo. Most other stores are selling it for $199. In the UK, Pixmania seems to have recently lowered the price for the Cybook Opus to £165. Last week it was listed at 7 pounds higher.

In the UK, the Sony ereaders are finally starting to drop in price slightly. The PRS-600 is selling for £187 from Amazon UK

Lastly, if you are looking to get an Aluratek Libre, Borders