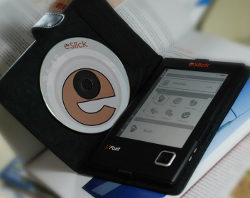 It comes as no surprise that Foxit, known for their PDF software, has decided to discontinue the Foxit eSlick ebook reader.

Like the Kobo eReader, Astak Mentor, and PocketBook 301, the Foxit eSlick is a rebranded Netronix EB-600.

The eSlick was Foxit’s only ereader and it has been on the market since 2009. It originally sold for $299, but Foxit dropped the price to $199 back in mid-June of this year.

But with all the competition coming out with new devices with lower prices, the eSlick didn’t stand much of a chance.

Since Foxit’s main focus is on PDFs, it’s a bit surprising that they never attempted to release a larger ereader designed for PDFs. 6-inch screens just aren’t very good for large PDFs no matter what software is installed on the device.

Here’s what the VP of Foxit’s sales department had to say on the matter:

“We have been licensing our PDF and ePub technology to a number of eBook vendors. Our decision to discontinue eSlick is to eliminate the possibility of competing with our partners,” said Erik Bryant, Assistant Vice President Sales, Foxit Corporation. “We’re looking forward to making the most impact possible on the growing eBook market by providing our proven, top-of-the-line PDF software technology as an industry standard to the principal providers of electronic reading devices.”