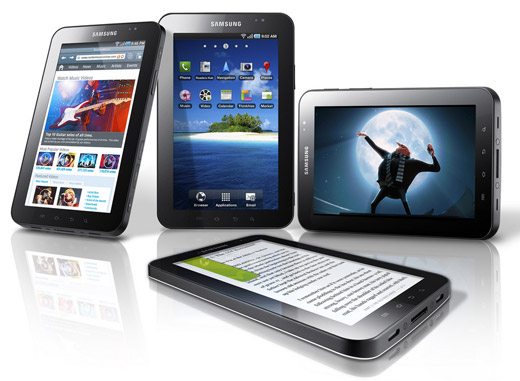 The first major competitor to the Apple iPad has arrived in the form of the Samsung Galaxy Tab, a 7-inch Android-powered tablet and ereader that can browse the web in all its Flash-enabled glory, play 1080p HD movies and 3D games, video chat with its front and rear facing cameras, and download and read ebooks from a plethora of sources.

The Galaxy Tab has already been released in Germany for €799 and is coming to the UK on November 1st for a reported £599 contract-free or £199 with £25 per month payments for 2 years.

The US versions of the Galaxy Tab will come via the 4 major wireless carriers: AT&T, Sprint, T-Mobile, and Verizon. It is expected to sell for about $399 with a two year contract or contract-free for $599. Verizon will start selling it on November 11th in the US for $599, with no subsidized option. Instead, Verizon will sell contract-free data plans that start at $20 per month for 1GB.

Running Android 2.2, the Galaxy Tab features a 7-inch TFT multi-touchscreen with a 1,024 x 600 resolution display. It is powered by a 1GHz Hummingbird Application processor for 3D games, speedy web browsing and video. It has a 4,000 mAh battery that gives the device up to 7 hours of video playback per charge. 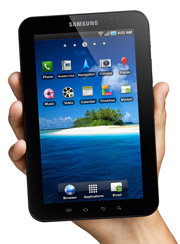 For wireless connectivity, the Galaxy Tab has 3G, Wi-Fi, and Bluetooth 3.0. There are rumors of a Wi-Fi only version coming in the future too.

It has front and rear facing cameras for video chat and for taking pictures and videos, it supports Flash-based videos and games, and provides access to the more than 80,000 applications currently available on the Android Market, which includes the Kindle, B&N, Kobo, and other ereading apps.

According to Samsung’s media release, the Galaxy Tab shares many of the same features of the Galaxy S smart phones that launched earlier this summer, including Samsung’s Social Hub application and the new Media Hub content service, which offers movies and TV programs for rent or purchase from content partners like MTV Networks, NBC, Universal Studios Home Entertainment, and Paramount.