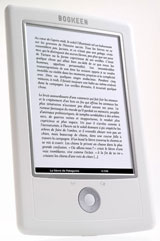 Bookeen’s latest ebook reader, the Cybook Orizon, is now available in the United States, Canada, Europe, and even Japan.

The Cybook Orizon is a 6-inch ebook reader with a SiPix touchscreen. The touchscreen was developed by Bookeen and looks to have some pretty cool features in the video. For one, you can pinch to increase and decrease font size.

Even better, the video clearly shows that the text isn’t nearly as gray as the text on the new Pandigital Novel’s SiPix touchscreen, so obviously the contrast appears much better, even though the background color on the SiPix screen is noticeably darker than E Ink screens when compared to the Sony PRS-650 in the video.

The video reveals some other cool details about the Cybook Orizon too. Like the fact that it has several different font types and text customizing options. There even appears to be an embolden setting to make the text really stand out.