It’s finally happened. They’ve been talking about it all year long, giving numerous release dates that pass by without a word, advertising several ereaders and then changing to different ereaders halfway through the year, marketing a $99 color ereader on several major websites and then disappearing from sight.

The Copia eBook social network and marketplace has finally gone live. And the Copia line of ereaders have been canceled. That explains why the mysterious $99 ereader never arrived (they even went as far as telling me personally that they’d be issuing a press release “next week” regarding its release, and that was several months ago).

Their line of ereaders were never meant to be, but they have high hopes for their new ereading platform that combines social networking with ebook reading, sharing with friends and making reading interactive. Instead of marketing their own line of ereaders, Copia has decided to partner with various OEM manufacturers to use the Copia software on their devices. 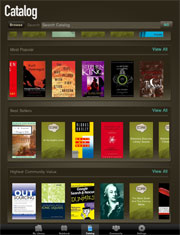 There currently aren’t any ereaders that have the Copia software installed, however, nor have any OEM partners been revealed. For now, Copia has a desktop application and an app for iPad, both of which can be found via the Copia website. They are currently giving away 7 free ebooks for signing up.

According to Publishers Weekly, Ben Lowinger, executive vice president of Copia Interactive, said that Copia plans “on fully supporting the products of our brand partners to deliver a consumer experience that greatly enhances the devices that are important to them. In the near future, you will see the Copia platform available on a wide range of digital devices further promoting Copia’s concept of community.”

The major question this all brings up is who is going to be the OEM, and what kind of presence will they have. It’s hard to see how one small company that is focused on delivering a platform for ebooks and social networking can gain any kind of foothold in the US with the ebook reading market already dominated by such large companies like Amazon, Apple, Sony, and Barnes and Noble.

Perhaps Copia should strive to get their software onto smartphones; that would be their best bet at this point. I don’t see how any new brand of ereader from an OEM is going to gain any substantial share of the US market. Not in this competitive climate.