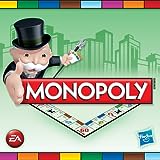 Amazon is running a promotion until January 2nd for five popular Kindle Games by Electronic Arts.

The games include Monopoly, Scrabble, Texas Hold’em, Solitaire, and Sudoku. These games work on Kindle devices and not Kindle apps.

After discounts, Monopoly and Scrabble cost $2.49 each and the other three games cost $1.99 each.

The Monopoly game is new; it was released today, in fact. It has 1 five-star review. Solitaire is the next highest rated game with 4.5 stars over 29 reviews. Sudoku is rated 4 stars with 25 reviews. So is Texas Hold’em with 10 reviews. Scrabble has 3.5 stars and 76 reviews.