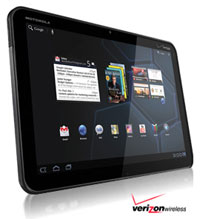 2011 is going to be the year of the tablet, and the wireless service providers are looking to cash in big.

A lot of the new tablets coming out have options for 3G and sometimes 4G wireless in addition to WiFi. At the time of purchase, many of these new tablets require you to sign a contract for a 2 year data plan. Either that or pay a lot more up front.

What’s worse is that many of these data plans are based off of cellphone plans. A 1GB data plan is absolutely ridiculous for a tablet, especially at $20 a month like Verizon is offering for the Motorola Xoom. You could eat through 1GB in an afternoon surfing the web and watching some YouTube videos. And then they’ll slam you with overage charges to make it worse.

My advice? Never buy a tablet that requires a contract. It is not a cellphone. WiFi is becoming more widely available all the time so you aren’t going to need 3G most of the time. 3G is too slow to provide a good tablet usage experience anyway. Ever try to watch high quality videos over 3G? Good luck.

And then there’s the fact that tablets are still basically in their infancy. There’s going to be so many advances over the next year in tablet hardware and software that locking yourself into one device for the next 2 years is a horrible idea. What if you pick a brand that’s not going to update the operating system? What if next year a different tablet comes along from a different carrier that’s ten times better and half the price?

If you are going to buy a tablet this year, research wireless provider options first. You really should consider getting a tablet that offers month-to-month data plans instead getting locked in a 2 year wireless contract for something that’s new to the market and can’t even be used to make regular phone calls like a cellphone. That’s just my two-cents.