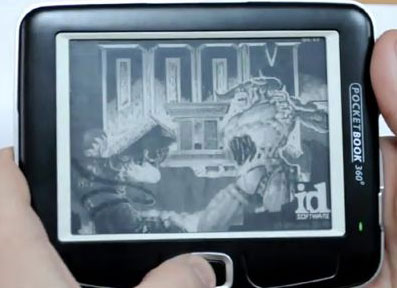 Information about the PocketBook 360 Plus is scarce at this point, but the video below shows some of its potential. It is presumably equipped with an E Ink Pearl screen and a new Freescale processor to achieve frame rates for video games.

This is similar to the video that Bookeen posted a couple months back where they managed to get video to play smoothly on a Pearl screen.

Running shooter video games like Doom 2 on an E Ink ereader isn’t something that is going to be practical, but it is good to see E Ink advancing in potential for future applications. Something like this could be applied to E Ink’s new Triton color display technology with greater benefits down the road.