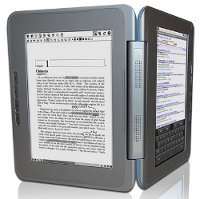 This doesn’t come as much of a surprise given the fact that the Entourage Pocket Edge has been deeply discounted of late, and the fact that I noticed it and the original Edge had disappeared completely from Entourage’s website several weeks back.

It’s too bad that the world’s first dual-book has seen its last days. With an E Ink screen on one side and an LCD screen on the other, the Edge was a device like no other.