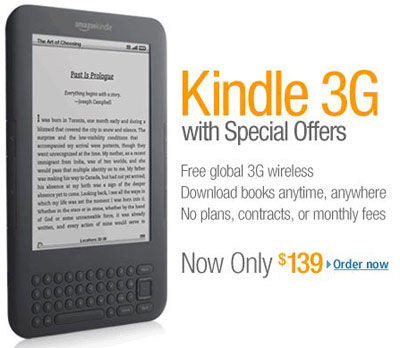 Today Amazon dropped the price of the Kindle 3G with Special Offers down to $139, the same price as the non ad-supported Kindle Wi-Fi and Barnes and Noble’s new touchscreen Nook.

AT&T provides the wireless coverage for the Kindle in over 100 countries across the globe. Amazon picks up the bill for this, of course. Kindle 3 owners don’t have to pay anything for the 3G wireless, and there are no fees or contracts.

This is a bold statement by Amazon, slicing $50 off the price of their 3G Kindle and pricing it the same as the WiFi-only Nook Touch and just $10 more than the Kobo Touch, making choosing one of the three even more difficult, especially now that the Kindle is the only ereader on the market that offers free 3G connectivity.

In the end, it all depends on how important 3G wireless is for your ereading needs. Someone that travels a lot or someone that doesn’t readily have access to Wi-Fi is going to benefit more from the Kindle, as well as those that want the additional features of text-to-speech and audio support. Otherwise the new Kobo and Nook are probably going to be more appealing for their easy-to-use touchscreens, memory card slots, EPUB support, faster navigation, and the Nook’s support for Android apps through rooting, and Kobo’s support for adding fonts.

So what’s going to be Amazon’s next move? A price drop to $99 for the Kindle WiFi with Special Offers? That’s only cutting $15 off the current price, but crosses a major psychological barrier to the realm of two figure pricing. It seems like that would make a bigger impact than a $139 Kindle 3G. People have been waiting to see a $99 Kindle for a long time. It’s bound to happen sooner or later.