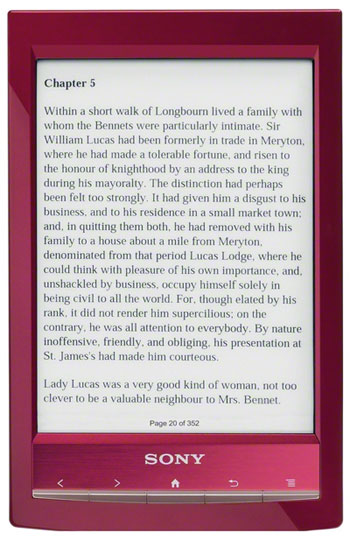 More details are rolling in (and a video) about the new Sony Reader PRS-T1.

First and foremost, Engadget updated an earlier report saying that they’ve received confirmation that the new Reader Wi-Fi is running a heavily disguised version of Android. They don’t give any details other than that statement, but if it is indeed true that could be the smartest thing Sony ever did for their brand of ebook readers.

Just think, a hackable E Ink ereader with multi-touch support and audio support. That would be even better than a rooted Nook Touch. Hopefully the Reader Wi-Fi is at least running Android 2.1 or better. If so, it could become the ultimate ebook reader once rooted, at least for 6 months or so until someone else releases something better—the shelf-span of electronics is a cruel mistress.

Aside from Android hype, Sony’s Italian branch uploaded a marketing video on YouTube for the new Sony Reader Wi-Fi earlier today. This is one of many signs that Sony is going to bring more focus to international markets with its new Reader Wi-Fi. In fact, the Reader Wi-Fi press release states that Sony is finally bringing its ebook store to Europe, and will be coming first to the UK, Germany, and Austria later in 2011.

Plus, there’s some good news on the font front. There’s this article at PC World that confirms the new Reader Wi-Fi has six font styles to choose from instead the lonely one that all the other Sony Readers use—finally Sony listened!