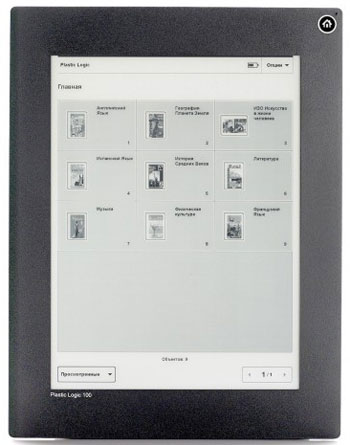 Plastic Logic finally managed to get an electronic reader onto the market—in Russia. It’s called the Plastic Logic 100. It is designed specifically for the education sector, with the aim of being a textbook replacement device.

It has a roomy 10.7-inch screen and uses the same plastic-based epaper technology that Plastic Logic’s first ereader was supposed to use, the Que Pro Reader, that was cancelled before orders ever shipped—the high price and iPad killed it before it was ever released—and then Plastic Logic had to move to Russia to stay afloat.

Now enters the Plastic Logic 100, an electronic textbook reader, with its anti-glare, anti-fingerprint, shatterproof, screen, a capacitive touchscreen in fact, with a resolution of 1280 x 960. Features include an 800Mhz processor, 4GB of internal memory, micro USB, battery life of one week, and Windows CE operating system. The device measures 216 x 280 x 7.65mm and weighs 475 grams.

It has underlining, annotating, bookmarks, a virtual keyboard, and a search tool. Looks like the perfect device for PDFs, not just textbooks. But the Plastic Logic 100 is being released as part of an education program, so it’s not marketed as a PDF reader specifically…yet.

Russia seems to be the hotspot for testing ereaders in schools. Hopefully Plastic Logic has more success this time around, and can soon expand on their market, but you got to wonder if they are going to be too late again.

The JetBook Color is another example of a new textbook ereader in Russian schools. And it looks like it has a major edge on the Plastic Logic 100, not only because of its color epaper screen, it has more software advantages and learning software built-in too. The JetBook Color sells for about 3,000 rubles more, however, so that could be a big factor since that’s a 25% increase. The Plastic Logic 100 sells for 12,000 rubles, equivalent to about $396 USD.

Below is a video for a hands-on look. It’s in Russian, but gives a good look at the new Plastic Logic ereader in action, as well as the hardware and compares it next to an iPad—an old trusty Sony PRS-505 even makes a cameo appearance. The hardware looks solid, he even assaults the screen with a few different objects. The device is quite large, bigger than the iPad, and thin too.