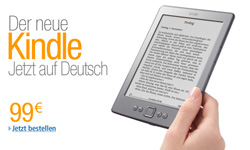 It turns out the Kindle coming to France rumor was true. Spot on, in fact.

Today Amazon launched the French Kindle Store, complete with a localized version of the Kindle 4 for €99, 35,000 French-language books, hundreds of graphic novels, over 4,000 free classic ebooks, and 825,000 ebooks in English and other languages.

This marks the third international Kindle Store expansion. First it came to the UK last in August of last year, then the German Kindle Store opened just this past April, and now Amazon.fr has its own Kindle Store too.

In addition to the launch of the French Kindle Store, Amazon.fr announced that authors and publishers can use Kindle Direct Publishing to make their books available in the Amazon.fr Kindle Store.

Here’s more info about the French Kindle Store from the press release:

Also, Amazon updated the Kindle for Android app today to add support for French, Italian, Spanish, and Brazilian Portuguese. So it looks like more localized Kindle Stores to come.