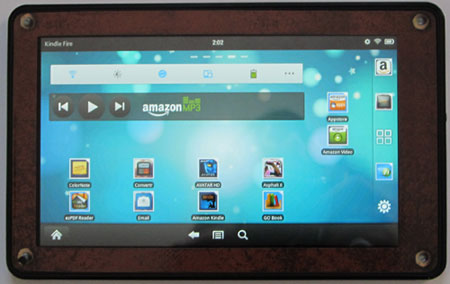 I mentioned installing a new homescreen on the Kindle Fire to bypass the default homescreen and carousel in the Kindle Fire tips and tricks post, but I don’t think most people understand how easy it is and how it doesn’t require rooting or any technical work whatsoever.

The number one biggest complaint I’m seeing about the Kindle Fire is the default homescreen and carousel. A lot of people would rather have more options for customizing and a good share of folks want to do away with the carousel altogether.

So for this post I’m going to show you how to do just that by installing a new homescreen on the Kindle Fire and how to customize it to your liking with widgets and apps and themes. No rooting or hacking required.

Unfortunately most Android launchers won’t work on the Kindle Fire. Two that do are ADW EX and Go Launcher EX. I’d recommend the latter because it is loaded with customizing features. I never realized just how much it can do until I started experimenting with different things to put together this tutorial—it blows away all the other launchers I’ve ever tried by light years.

How to Install Go Launcher on Kindle Fire

Ironically Go Launcher is available for free in the Amazon appstore but Amazon hides it on the Kindle Fire I guess because they don’t want people to use it. Luckily the developers for Go Launcher post their apps on their website for easy download.

Here’s what you do to install Go Launcher on the Kindle Fire:

Go Launcher is Installed, Now What?

Now you can start setting up Go Launcher how ever you want. Here are some of the different things you can do:

Also, there are apps for most of the Amazon services, but you’ll still need to use the Launcher app to go the Kindle homescreen to access your books and magazines lists.

Some features don’t work like they should probably because the Kindle interface is interfering. Here are some things that don’t work:

A couple of things I did to customize Go Launcher as shown in the picture at the top of this post was to reduce the size of the app icons in preferences. This makes them look better, especially in landscape mode. I also applied the WP7Blue theme downloaded from the Go Store and changed the icons on the power control and added different apps to the dock row.