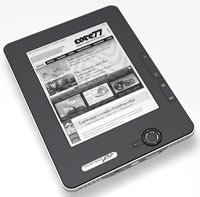 I have the PocketBook 602 and haven’t used it in several months so I thought I would bust it out (surprisingly the battery was still over half charged) and give the new firmware a test drive.

Here’s a quick overview of the new features:

Overall the new firmware is a nice improvement. However, my PocketBook 602 has frozen up a couple a times while testing it and it sometimes takes forever to initially open an ebook.

Other than that, the new firmware has given me an opportunity to remember just how nice the PocketBook 602 is. It’s built really well and offers a ton of features, including some that no other ereaders have. About the only thing PocketBook’s Pro line doesn’t offer is a Pearl screen. It’s odd that they’re are still using the older Vizplex screens, even if the difference between Pearl and Vizplex isn’t that significant.

To get the new firmware, hit the PocketBook support page and choose your model. The install directions and user guides can be found there as well. Basically, just download the new firmware to your computer, extract it, then drag and drop the contents to the root of the PocketBook drive or memory card. Power off the PocketBook, then turn it back on and hold down both page-turn buttons to prompt the firmware update screen. Then follow the on-screen directions to apply the update.