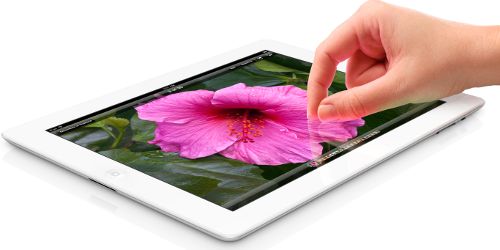 I decided to order one of the new iPads to review because I wanted to see the new high resolution retina display and how it adds to the ereading aspect of the iPad.

I’ve always been critical of the iPad 1 and 2 as ereaders because I never liked how pixelated the text appears, and not just with ereading apps but with other apps too, including the web browser. When text isn’t crisp and clear it bothers me because I’m so used to the super-clear text on E Ink ereaders.

As a result of this, I really haven’t covered the iPad on this website very much. But now that all changes with the 2048 x 1536 pixel resolution screen on the iPad 3. With 264 pixels per inch, that’s double the resolution of older iPads.

There’s no question that the screen on the new iPad is the best of any screen on any tablet to date. Sure colors are vivid and bright, but it’s the text that I really like. Even on the smallest font setting in ereader apps (Stanza has really tiny text) there is no jaggedness or visible pixelation whatsoever. Text is super crisp and super clear.

This adds to the outside readability too. The new iPad has tons of glare on the screen just like before, but with the brightness turned all the way up the text is surprisingly clear (I’ll post some pictures this weekend).

But as much as I like the new higher resolution screen, it’s probably not that huge of a difference for most people. It is certainly noticeable side-by-side with an older iPad, but the average person likely wouldn’t point it out as a major difference after testing the new iPad on one occasion and an old iPad at a different time. Tech people would notice but I’m not sure the typical iPad customer would.

Still, I really like the new iPad’s screen, and would recommend getting it over an iPad 2 if you intend to do a lot of ereading.

What I like most about the iPad’s new screen is that it sets the bar for the competition. Personally, I favor Android tablets more because of the openness, customization, development (hacks and ROMs), and the fact my purchased apps are transferable to other devices, lots of devices. The new iPad is going to push Android tablets to up the pixel resolution too. This time next year there will probably be a whole slew of Android tablets with higher resolution screens.

So obviously the screen on the new iPad is the good news. I’d thought I’d even it out with some bad news.

My biggest concern with the new iPad thus far is how warm it gets. The back left corner really heats up on the new iPad, much more than any other tablet I’ve tested to date. It’s not going to burn your hand or anything, but it does get uncomfortably warm after extended use. The heat even radiates to the front so the front of the touchscreen gets pretty warm too. I will definitely be picking some sort of back cover, perhaps a rubberized cover, so that it is more comfortable to hold.

The new iPad just arrived this morning so I’ll need more time for testing before writing a full review. I plan on posting some pictures and videos—comparing the screen with other devices and such—over the weekend so check back or subscribe to keep update.