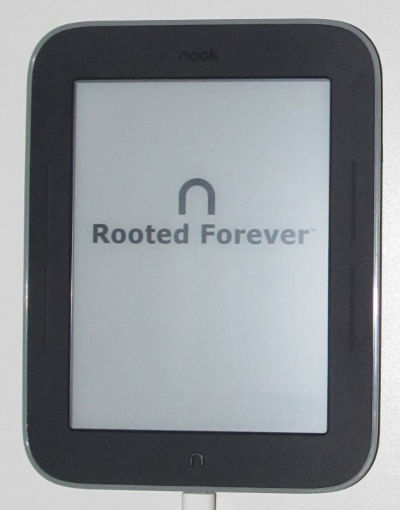 Now that the Nook Glow has been released, development is already underway to get it rooted just like the original Nook Simple Touch.

But the #1 most important thing to do before rooting or experimenting with any hacking is to create a backup so that you can restore your Nook Glow or Nook Touch to a previous state in case something goes wrong or if you want to unroot your Nook.

Luckily, the method for backing up and restoring the original Nook Touch works just the same on the Nook Glow. I followed the directions at XDA and had a backup in a matter of minutes. The directions are for advanced users that are already familiar with certain steps so I thought I would go ahead and put together step-by-step directions below.

What you will need

You’ll need to download and install these three free programs on your Windows computer:

Another thing you will need to create backups and to restore is the noogie.img file:

We need to write the noogie image downloaded above to a microSD card.

1. Download the noogie.img.gz file to your computer and then extract it.

2. Open WinImage. Select Disk > Restore Virtual Hard Disk image on physical drive… Select the microSD card from the list and hit OK. Now locate and select the noogie.img file to open (make sure to select “All files” from the drop-down list to get img files to show up). After hitting Yes, WinImage will write noogie to the microSD card.

1. Power off your Nook Glow/Nook Touch (off, not sleep).

2. Insert the noogie microSD card and power on. You should see a “rooted forever” screen like the one at the top of this post (don’t worry, your Nook isn’t really rooted yet).

3. Plug your Nook into your computer with the USB cable.

4. Open Roadkil’s DiskImage software. Make sure to select the “Store Image” tab. Then choose the Nook Drive from the drop-down list. It is called Physical Drive and should be about 1.82GB for the Nook Touch and 1.86GB for the Nook Glow. Choose a destination to save the file and then hit start to create a backup.

5. After the backup copy has been saved, you can now disconnect your Nook from the computer and remove the noogie microSD card from the Nook. Reboot your Nook and it is back to normal. It can be a little tricky to get it to reboot. Don’t panic. Hold down the power button for several seconds. Sometimes it takes several times of holding down the button to get it to restart.

Now that you’ve got a backup, it’s safe to start rooting and modding your Nook. Hit the Nook Touch Rooting Guide for the complete walkthrough and video. Those directions are for the Nook Touch only; the Nook Glow doesn’t have a rooting package yet. I’ll post directions when it does. Subscribe to keep updated.

How to Restore Nook Glow/Nook Touch

1. Power off your Nook Glow/Nook Touch.

2. Insert the noogie microSD card and power on.

3. Plug your Nook into your computer with the USB cable.

4. Open MiniTool Partition Wizard. Select the Nook Drive. Make sure to select the right drive! Then right-click the Nook Drive and select “Delete All Partitions”. Again, make double-sure you selected the right drive; it will be under 2GB. After confirming, you will then have to hit “Apply” in the upper left corner to make the delete official. 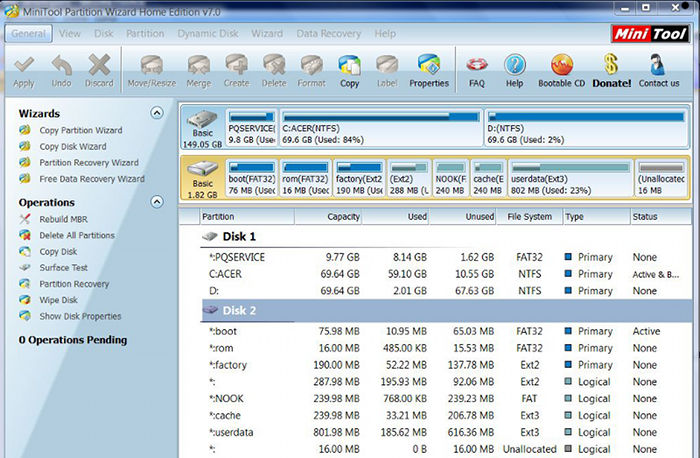 5. To restore, open Roadkil’s DiskImage software. Use the “Write Image” tab this time and select the Nook Drive from the drop-down list. Select the source file, the backup image you created earlier, and hit start to restore.

6. When the restore is finished, you can disconnect your Nook from the computer and remove the noogie microSD card and reboot.