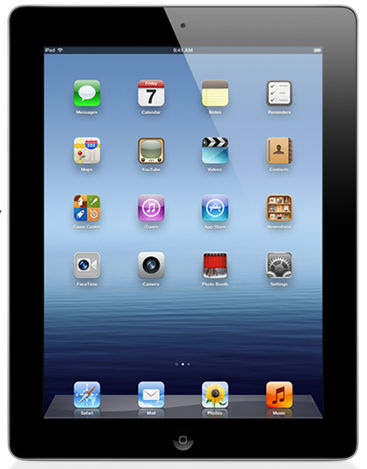 I’ve been using the new iPad as my primary tablet since it arrived in March, and I really like a lot of things about it, especially the high resolution screen, but like any gadget there are some things that I flat out don’t like.

And since I have a unique perspective in that I’m just as familiar with Android tablets as the iPad, I thought I’d write down the points where the iPad falls short.

So here are the top five things that I hate the most about the new iPad:

1. Limited memory and no memory card slot. It’s crazy how limited the iPad is in terms of storage space. It and the Kindle Fire are about the only tablets on the planet without memory card slots. I’ve got a 16GB iPad with about thirty apps installed and they take up all but about 4GB of space, leaving very little room for videos, photos, music, ebooks, or anything else.

2. Operating system is too basic. After you’ve had a taste of Android, the iPad’s operating system leaves much to be desired. All you’ve got is a bunch of square app icons. You can change the background image and that’s about it for customization.

Aside from the addition of gestures for quickly switching between apps, the iPad’s operating system looks and feels and operates pretty much exactly the same as it did over 3 years ago when the iPad 1 was first introduced. It’s time for an upgrade, Apple. Stop making the iPad a large iPhone and give it its own set of features with widgets and the option to have multiple windows open at once—make use of its larger screen. If Quasar can do it, why can’t Apple? Just think of how much more advanced the iPad could be… 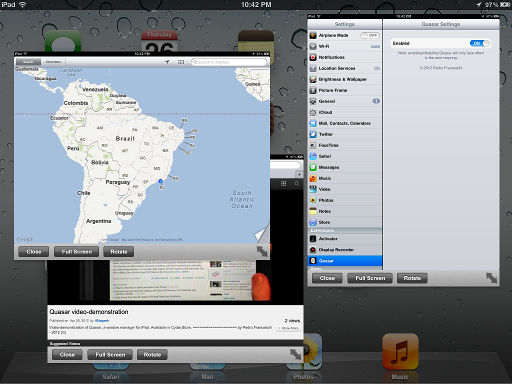 3. The App Store. For some reason I often have a hard time finding decent free apps for the iPad; you’re pretty much going to be paying for everything if you want it to be any good and not be loaded with annoying ads. And a lot of times apps that are free on Android are paid apps for the iPad.

While I have no problem paying for certain kinds of apps, there’s no way I’m paying for something as basic as a calculator or RSS Reader. I finally found a decent free calculator without ads but couldn’t find a decent free RSS app that worked well and didn’t have annoying ads—I eventually settled on just using Google Reader with the web browser.

Another point with apps is that Google apps often aren’t as good as their Android counterparts. This is especially evident with the Maps app—the Android version is more updated and has ten times more features.

Probably the most irritating thing about shopping from Apple is the fact they force you to enter your password every time you want to download something. This makes sense for paid items, but is irritating and pointless for free items. And since Apple requires a complex password with numbers, letters, and at least one capital letter, having to go through the motions of typing it in all the time get’s really annoying really fast. Why there isn’t a setting for this is anyone’s guess.

4. No HDMI port. A lot of Android tablets come with mini HDMI ports nowadays, even some cheap $99 ones, but the iPad does not have any easy way to connect to a TV unless you buy expensive hardware from Apple. This is disappointing because a tablet in hand is fun for one person, while a tablet plugged into a big-screen TV is fun for a whole lot of people.

5. Web Browser. The Safari web browser is fast and smooth, but it is too basic for a high-end tablet. The lack of Flash support is the most obvious problem. And something that annoys me on a daily basis is the fact that it makes selecting text too difficult. It often highlights the whole sentence or paragraph or page instead of a single word, and then the cursors often refuse to go where you want them.