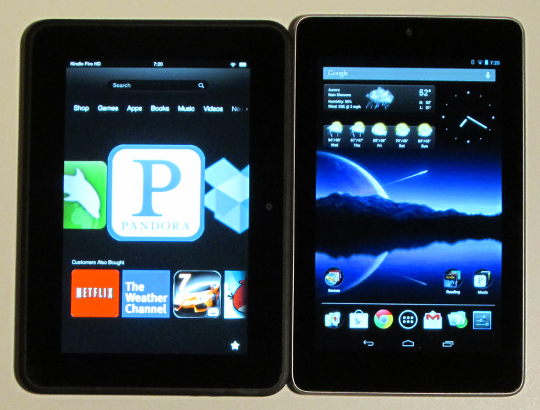 For this comparison review I’m pitting the 7" Kindle Fire HD against the Google Nexus 7 to outline the main advantages and disadvantages of two of the most popular 7-inch tablets on the market.

I’ve also included a list of similarities between the two, a spec sheet comparison, and a video review showing the Kindle Fire HD and the Nexus 7 side-by-side.

Also, here’s the link to my hands-on Google Nexus 7 review for more specific info on it, along with a video walkthrough. I haven’t finished putting together the written review for the Kindle Fire HD just yet, but you can find more info here on the Kindle Fire HD section of the blog, which includes a video review and first impressions post.

My opinion is the Kindle Fire HD is more suited for people that fall into any of these categories: those who are new to tablets; those that are less technically inclined and want something easy to learn how to use; for people who already have a lot invested in Amazon’s digital content, especially movies; or for people who want to be able to connect to a TV.

The Google Nexus 7 is more suited for someone who likes more freedom for customization; for someone who wants a more open device with more overall software features; for those that want access to the larger selection of apps; for spec junkies who want the extra speed of the quad-core processor; or for those who have already owned an Android tablet or phone (if a person has already owned an open Android device, the Kindle Fire will likely feel too limited and closed-in).

The bottom line is this: both tablets offer something the other does not, and both are great values for the price compared to most everything else out there so you can’t really go wrong with either of them. The Kindle Fire is more limited from a software standpoint, but if you are willing to give up the warranty you can hack it to get access to Google Play for the same selection of apps as the Nexus 7.