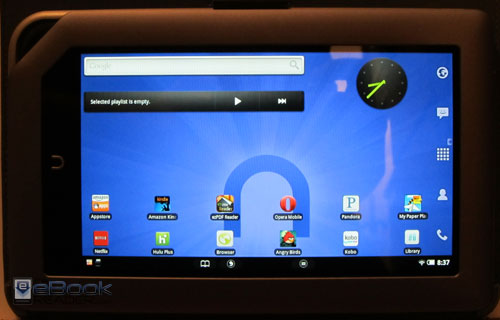 The title says it all. It turns out there is a really simple way to install third-party apps on the NOOK Tablet

without a hack, including the Amazon appstore.

As you can see from the picture above, I’ve got Launcher Pro installed on my Nook Tablet, along with the Kindle and Kobo ereading apps, ezPDF, Opera Mobile, and some games and other apps too. Plus the Nook Tablet and all its features still works like normal. I can’t believe it!

Update: Unfortunately Barnes and Noble issued a firmware update that closes the loophole to install apps. If your Nook Tablet is running firmware 1.4.1 or newer, then it is no longer possible to sideload apps. But you can still run alternate versions of Android from a memory card to get full access to Google Play.

Okay, so I know you are eager to try this out on your Nook Tablet, so enough with talk, here’s the directions:

1. Enable 3rd party app installs. This link will install the Amazon appstore, but you don’t have to install it if you don’t want, just use it to trigger the hidden menu; only certain apps will do that. Open the Nook Tablet’s web browser and enter this url: http://www.amazon.com/app-email

2. Tap the download icon in the lower left corner of the Nook Tablet’s screen. When the download is finished, tap the notification.

3. When prompted to install, always select the second option “Package Installer”. If you select “App Installer” it will mess up the file and you’ll have to re-download it.

4. This will prompt an option to select a hidden settings menu in the Nook Tablet. From there, check the box at the top that says “allow installation of non-Market applications”. Once you check that box, the Nook Tablet is free to install apps from anywhere you can get them!

Now you can tap the notification bar again for the Amazon download to install the Amazon appstore. Note that you have to have a microSD card installed in the Nook Tablet to install apps from Amazon.

Setting up a Launcher

1. You’ll need to setup a separate launcher now that app installs are enabled because any apps you add won’t show up in the regular Nook Tablet’s set of apps; you need an Android launcher to easily get to them. There are some launchers in the Amazon appstore but I installed Launcher Pro instead.

2.a. There’s no obvious way to access the launcher from the B&N homescreen. One workaround is to tap the “n” button and then “search” and then type the name of the launcher app you chose to use and it will appear in the search results ready to launch.

2.b. Install HomeCatcher to set the “n” button to redirect to the launcher home instead of the B&N Nook home.

2.c. Another option is to install button savior. Just run a search for “button savior apk” on Google and install it with the browser (I used this one). I got a prompt to enable debugging when launching button savior the first time. I hit “yes” but nothing seemed to happen so the second time I hit “no” and now it is working fine. It puts a small, nearly invisible icon on the right-edge of the screen. Tapping it opens on-screen android buttons. The only one that works is the Home button without root, but that’s all we need. So now you can hit the home button anytime to bypass the Nook Tablet’s B&N homescreen.

Installing Apps on the Nook Tablet

Now that you have a launcher setup to get to the apps you install, it’s time to get some apps. There are a lot of places on the web to get Android apps. There’s the GetJar appstore, SlideMe, and many others. I often use Android Freeware to download APK files directly. The Nook’s browser works well for that. Just make sure to hit “Package Installer” when prompted to install.

What a strange loophole, huh? I tried installing a couple of apps from Android Freeware after first getting the NOOK Tablet

, and while the app install prompts were promising, none of the apps I tried would install. It’s funny that only certain apps trigger the hidden menu to allow third-party apps installs. I’m sure glad someone at XDA noticed. I wonder what Barnes and Noble will do about it…

Update: I uploaded a video on YouTube to show how the process works and to give a look at some of things you can do with 3rd-party apps on the Nook Tablet.